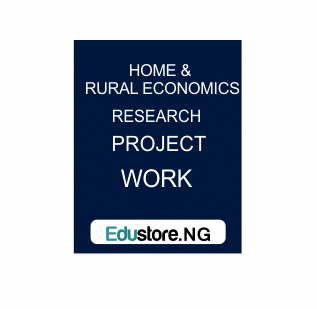 Scope of the study

The study examined the impact of family planning campaign on Ibagwa couples. The study highlighted the factors militating against appreciable acceptance of family planning practices. It further sought solutions to the hindrances. Simple random sample of three hundred and fifty (350) respondents was drawn from the seven (7) villagers that make up the research question. Simple percentage was the instrument used for data analysis. In the light of the findings practical recommendation were made.

The population problem has occupied the attention of thoughtful men in all ages of the world, and the forms taken by this problem varied with the particular conditions, place and time. At one period the aim might be to keep up the number of males to make good ravages of war; at another time may be there was fear that the growth of population would out strip food supplies. The spread of Christianity with its culturalization of respect for human life as opined by Hanson (1972) also aggravate the population problems of the people who had previously kept down numbers by such practices as infanticide. None – the – less, high population is not with out its costs, hence efforts at controlling the population of nations through family planning. Commenting on the implications of large population, Nnubia (1999) noted:

The effect of large population …………. Stares us in the face in all spheres of our national life – standards of living, unemployment, poor quality education, bad leadership, and general under development.

Arising from the above therefore, is the urgent need for planning and regulation of family numbers. As noted by Hugh (1990) family planning is aimed at assisting individuals achieve their reproductive goals of replacement, but not necessarily to increase the world population.

According to World Health Organization (WHO: 1971), sees family planning as a way of thinking and living that is adopted voluntarily upon the basis of knowledge, attitudes and couples in order to promote the health and welfare of the family group, and this contributes effectively to the social; development of the country. In the same vein, Abuzu (1988) sees the concept as:

A way of life within the family planning culture which is based on accurate knowledge of the national signs and symptoms of the fertility inherent in the human life from the moment of conception and free sexually informed and mentally self responsible decision making by married couples to achieve or postpone welfare of their entire family group.

On the part, the Catholic Church defined family planning as the privilege and obligation of the married couple exclusively to decide with love when and how many children they want, provided the motive is justified and the means is moral. If the motive for family planning, it went on, is not justified, it does not make any different if the method is artificial or natural. They are both wrong (St, Marie-Gibbeous, 1983). Still on the concept, Lucas (1968) conceived it as the activity that enable every family to have as many children as they desire, when they want them, this means educating them and encouraging them to space or limit the number of children and ensure optimal family health.

Series of campaigns have been initiated towards tacking the issue of population problem. In the forefront was Magerat Sanger (1879-1966) in her Birth control message. Another effort is the Hitler sterilization programme; & still the present day efforts of the Planned Parenthood federation, a baby of Sauger. There are modern method apart from the traditional methods adopted by ruralities in the under and developing countries. Such methods as abstinence, prolonged lactation and use of locally available plants to ensure proper spacing of children (PPFN profile, 1968) were have been in use in the effort at controlling family number ¾.

The campaigns started in arnest in 1964 with the formal establishment of the Planned Parenthood federation of Nigeria, Ude and Obiejesi (1995). By 1984, the government of Buhair issued a statement on government involvement n family planning. In Enugu State, the Fnitia Lattempt in 1974 yielded no much success until in 1992 during the regime of Nnamani when series of family planning series, education, and information through mass media were rural its the benefits of family planning and birth control methods.

The need for this campaign in Nigeria, especially in rural area a part from the treat on the world size is also borne out of the attendant health and social problems. These are in the areas of frequent illegally induced abortions, child dumping, unwanted, pregnancies and high maternal and child mortality rates: Leskin (1981). It is therefore the researchers’ interest to find out the impact of such campaign on Ibagwa couples. Hence the study.

There has been astronomical up surge in the population of nations without corresponding increase in facilities to match such increase. The up surge has socio-economic and health implications both for individuals and the nations at large one solution to solving this is adoption of family planning practices.

In the under developed state, especially the rural areas, factors such as religion, illiteracy, socio-cultural practices are held in high esteem and citizens hold firmly to these factors thereby resisting any change.

It is in the face of this problem that information of family planning is disseminated to rural dwellers majority of whom may have not heard of modern conceptive devices. To ensure that the information get to the grassroot various means of communication are employed for the purpose.

The problem of this study therefore is to find out the effect of the campaign on couples, acceptance of family planning practices in view of the hindering factors – religion, illiteracy, socio-cultural, practices, etc.

The main purpose of this study is to find out the following;

Significance of the Study

The findings and recommendations of this investigation will help the rural couples to have more information of family planning and there by embrace the main theme of the campaign – planning one’s family for his & the general good.

Government and its agencies: National Economic Planning Committee, other planning organizations and policy formulators would find the work useful in the area of assessing the outcome of adopted strategy in the campaign efforts.

This study is restricted to the effect of family planning campaign on couples in Ibagwa town, Igbo Eze South L.G.A, Enugu State.

The study sought answers to the following: