Welcome! My name is Damaris. I am online and ready to help you via WhatsApp chat. Let me know if you need my assistance.
Whatsapp Us!

The Classification And Knowledge Development By Technical Librarians In Academic Libraries In Anambra State.

Home RESEARCH PROJECT TOPICS AND MATERIALS The Classification And Knowledge Development By Technical Librarians In Academic Libraries In Anambra State. 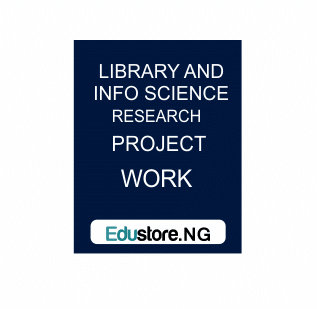 Download full Chapter 1-5 Project topic and material For Final Year student in Library And Information Science department titled, The Classification And Knowledge Development By Technical Librarians In Academic Libraries In Anambra State. View table of contents, abstract and chapter one below.

2.1   The concept/meaning of classification and

2.5   Library and information education and

2.6   The technical section of the library

2.7   The economic value of information and

knowledge and information in African

2.9   The role of academic libraries

2.10  The role of innovation libraries and

3.3  Population of the study

3.7   Reliability of the instrument

3.8   Distribution and retrieval of instrument

SUMMARY OF FINDINGS, CONCLUSION AND RECOMMENDATIONS

Library classification of a piece of work consists of two steps. Firstly, the aboutness of the material is ascertained. Next, a call number (essentially, a book’s address) based on the classification scheme in use at the particular library will be assigned to the work using the notation of the systems.

It is important to note that unlike subject headings or thesauri where multiple terms can be assigned to the same work, in library classification schemes, each work can be placed in one class. This is due to shelving purposes. A book can have only one physical place. However, in cataloguing one may have main entries as well as added entries most classification scheme like Dewey Decimal Classification (DDC) and library of congress classification scheme also add a cutter number to each work which adds code for the author of the work.

Classification system in libraries generally play two roles. Firstly, they facilitate subject access by alloying the user to find out what is available in a give library on a particular topic. Secondly, they provide a known location for the information source to be accessed leg where it is shelved.

Library plays a very important role in this economic and industrial development of developed countries. As early as 1995, Ifidon (1995) demonstrated how libraries (i.e academic, public and special libraries) were important building blocks in the economic and industrial development of developed countries Ifidon (2005) documented several information services that were provided by libraries in Canada, Germany and United Kingdom (UK) to the industry. Community which includes: providing access to patents… informations, reference services borrowing privileges, current awareness services, inter library cooperations, translation services etc. The range of these services varied according to the resources which can be tapped and the financial support given by local government and industries. A study of Kansas public libraries in the United States of America also showed that nearly a third of business and economic development organization in all pars of the state used public libraries as a resources high proportions of business that have their own libraries also use the resources and services of public libraries in most cases in the United State of America (USA) such as library system of Lancaster Country (PA) and the Cecil Country (MD) public library. Small Business Information Centre (Hamilton Pennell, 2008).

Most libraries in African are still in a weak position to successful playing their roles in economic and industrial development. Libraries are still tied in the traditional role of providing access to information resources by only acquiring processing and disseminating library materials.

Originally libraries were small, served the monitory and possessed a collection of books imported from colonial countries. This situation has not changed even when independence came to many African states. Most libraries have renamed with the Tittle content generated from the north, as their development was ignored in favour of the efforts to uplift poverty. Further, the rising cost of journal prices and adequate and expensive distribution mechanisms on knowledge and innovations in Africa have also inhabited libraries to provide access to updated and relevant literature for economic growth and industrial development journal subscriptions normally increase at rate of 11.16% every year beyond the reach of many institutions in Africa Ngika, (2006).

Academic libraries are among the best developed libraries in Africa and they can play a great role in serving the industry community. These libraries are well equipped.

However, there is a significant variation in there development and growth both in quality because their support mainly comes from their institutions with minimum subsidization they receive from government or other affiliations (Ocholla, 2008) despite the development of ICT, changing nature it will also serve as a guide line for the students scholars in library and information science field of study.

It will also serve as books of record in the field of information science.

It is a common knowledge that the viability of academic library have not been explored nor utilized. This is because of the excruciating in effective equipment of libraries in the Nigerian contemporary societies which has been culminating to the traumatizing non-challant attitude of the masses towards sourcing information from libraries, lack of interest in academic study cum knowledge acquisitions from academic libraries in Anambra State. It is unfortunate that Anambra is a failed state in regards to library building and knowledge acquisitions this is demonstrated by the past governments of Anambra State on their failure to support effective library buildings in the state, which has been stigmatizing (militating) knowledge exploration in the academic setting which demoralizes the interested researchers (readers) in Anambra State for the past twelve years in which knowledge development in Academic Library has become a past history in Anambra State

In line with the statement of the problems of this study which are not limited to the excruciating lack of effective support towards equipping academic libraries non-challant attitude of masses towards gaining new knowledge from academic libraries lack of proper library classification which makes information difficult for the researches, this work aims to the following;

This field research work will be significance in the following ways;

In line with the statement of the problems and in chronological with the purpose of this research work; the following (4) research questions were posed by the researcher which will guide this field research work.

In the course of this study the researcher encounters many impediments and challenges as follows: –

TIME CONSTRAINTS: Time constraint is one of the major factor that limits this course of study mean while, the researcher faced many activities coupled with her course of study.

FINANCIAL CONSTRAINT: The researcher of a student was financially constraint in the sense that she found it difficult to travel round Anambra State from week to week.

NON-CHALLANT ATTITUDE: of the respondents towards the questionnaires was also one of the factors that limited the researcher.

There are no reviews yet.

Be the first to review “The Classification And Knowledge Development By Technical Librarians In Academic Libraries In Anambra State.” Cancel reply

More from this seller…