The Effect Of Television Viewing On The Moral Behavior Of Nigerian Children.

Home Complete Research Project Topics and Materials In Nigeria The Effect Of Television Viewing On The Moral Behavior Of Nigerian Children. 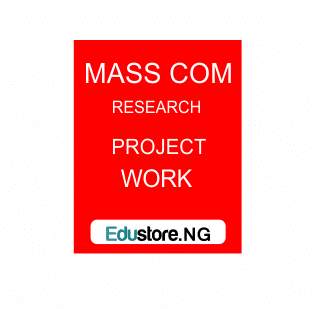 Download full Chapter 1-5 Project topic and material For Final Year student in Mass communication titled, The Effect Of Television Viewing On The Moral Behavior Of Nigerian Children. View table of contents, abstract and chapter one below.

The deterioration of the moral life of children who grow into youthful age and then into adulthood in the face of immoralities has become an issue which needs urgent action in today’s Nigerian society. This can be attributed to a lot of reasons but the mass media with us Persuasive messages cannot be exonerated. Television being a viable medium of the mass media stands at the fore in shaping the attitudes of children. This research work has therefore made a good attempt at unrevealing the various effects of television programmes on Nigerian children using Gaius Benton schools as a pivot. In this regards, a historical background of events bading to this study and analysis of findings and recommendations are duly presented. It is found in this research work that television programmes affect children’s moral behaviour both positively and negatively depending on the moral standards of the programme. The appraised and critical examination of issues are the mainstay of this research work thus, if the recommendation are heeded it will help in enforcing and maintaining good, upright and acceptable moral behaviour in Nigerian children.

Television is a sight and sound medium through which messages and information ideas are communicated to a wide range of audience.

Television viewing is a common activity engaged in by children, especially in this era of proliferation of television as a medium for communication.

To this end, television messages are broadcast for certain purposes, this implies that television through it’s programmers’ has certain influence on individuals as including children.

This chapter presents an overview of television and a brief history of television. It also encapsulates the statement of problem of this research work, the objective of this study, significance and the scope of study, research question as well as operational definition of certain terms.

Television has made tremendous impact on Nigeria society and in the world at large. It possesses immense power to influence the viewer and sharpen his sensitivity in all spheres of life. Various theories have been propounded by different scholars, some of which support the fact that the media possess immense power in influencing the viewer, while others have consistently countered the notion.

Television as one of the world’s most amazing inventions has come to stay and has over the years been a veritable channel for communication in the world.

The effects of television on adults can be significant but its influence in children goes much deeper. The increasing rate of immoralities in the society today among youths can be easily attributed to inventions of technologies like television, internet, films and motion pictures by an average Nigerian.

This study therefore is an examines the influence television viewing exacts on Nigerian children. Gaius Benton schools; cut across all sections of children from nursery, primary to secondary school.

It x-rays how the moral behaviour of children can be affected by television viewing which can be positive or negative.

Television is viewed in almost every home by people of all ages, the senile, parents, youths, children even infants.

The intensity of viewing by children and the extended periods of time over which they view television raises concern for their moral development.

The world today is said to be a global village thus issues, events and experiences going on in one part of the world can be seen instantly by people in other parts. People have more information about what is going on in world’s events than any other generation in human history.

Television over the years has played a pivotal role in the lives of individuals particularly children. The rapid growth of television after the World War II brought entertainment and information into the homes of many.

Large space communication was achieved in 1962 when a space probe radioed data, was moved back to the earth as it speed past the planet venues. The satellite made possible the broadcast over television between Europe and the United States of America and today, the rest of the world.

Cable television arrived in the 1970’s to most areas of the United States and now, to other parts of the world”. Akpan (2002, p.19) the use of television was expanded by the use of home videos and dick system.

Television as a broadcast medium has its main functions of information, education and entertainment on a wide range of subjects. An average child has access to but a small part of such information but it’s influence cannot be over emphasized for a look they say is worth more than a thousand words.

Television programmes may contain historical, scientific social, religious, economic and other matters. Those programmes when viewed especially by children broaden their cosmological perspectives thereby giving them better insight into happenings around him.

Television has served as a viable tool for instruction on religions matters. It has also served in experimental purposes. When properly used, quality television introduces children to a world beyond their classroom and motivate them to learn. Because children relate easily to television as a medium they are familiar with, they are more apt to absorb the material they learn from it.

The amount of television programmes watched by children has caused considerable concern for parents and educators alike. It is thought that children remain glued to the television set for long periods of time, viewing unsuitable programmes which a=mat adversely affect not only their cognitive but emotional development. No doubt, children are susceptible to the images which they see on the television. This therefore stress the fact that immoral programmes can to a large extent affect the morality of children all over the country and the would at large.

Communication through the television can be referred to as purposive because the information disseminated are meant to affect the audience positively or negatively. That is, it has a variety of consequences which may be direct or indirect.

Such effects or consequences include such factors as emotional response, attitudinal shift or changes in a child’s view of the world after exposure to certain kinds of media.

Children have the capacity to give themselves over completely to the world created by pictorial media (television). Such intense involvement often leads to storing emotional response and to a large extent affect the moral behaviour of children.

This study seeks to find out the degree or extent to which the children of Gaius Benton schools have been affected by television viewing and to establish if there are programmes on television that can enhance or mar the moral behavior of the children match.

There have been cases where children fold papers and light them up with attempts to practice cigarette smoking, having watched the action on the screen of television.

The kinds of clothing children see on television seems to shape their demands on parents who purchase clothes for their children, especially at festive periods. All these acts and more are caused as a result of visuals on the screen of television.

The major objective of this study is to determine the impact of television viewing on the moral behaviour of Nigerian children.

This study will serve as a means of future research for media researchers, scholars and students.

It will also help media ie television stations know the right type of programmes to air for children consumption so as to build morals and not kill morals in children.

The researcher of this work has prepared certain questions to help in the course of his study.

This study covers the effect of television viewing on the moral behaviour of Nigerian children. Gains Benton Schools as a representation of children of all ages serves as the case study of this research work.

Although, the main function of television as a sight and sound medium is to inform, entertain and educate its audience. This study will reveal the extent it does these with respect to the effects of viewing habit of children of Gains Benton Schools where the work is countered.

This research work is based on a sample of children between the ages of two (2) to eighteen (18) years of age (Nursery to secondary school age).

The greatest limitation to this study is time factor. There is limited time for the researcher to explore the topic.

Secondly, some of the children are too small and can neither read no write or even respond to questions through interview. Also, some of the respondents, students/pupils are too naive as they feel that the questions will be used against them.

Finally, financial constraint is another set back encountered by the researcher.

The contextual definition of certain terms are considered important on this study by the research.

Television: Television is an electronic device that utilizes motion pictures, sound and light in disseminating information to a wide and diversified audience to create an effect. Television is the medium that possess credibility audio visual qualities and can be utilized in virtually development communication (Nwosu, 2005, p.164).

Effect: This means a cause, a result or an outcome. It is a change produced by an action.

Behavior: This means the way a child acts or function.

Children: This is the plural of the noun child. A child is a young person (a boy or a girl) within pre primary, primary and post primary school age, (2 – 18 yrs).