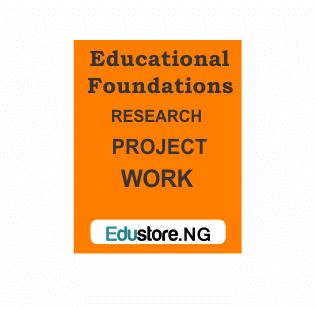 Download full Chapter 1-5 Project topic and material For Final Year student in Educational Foundation department titled, Strategies Used By Nigerian Universities In The Management Of Inter-group Conflicts. View table of contents and chapter one below.

This paper examined the strategies used by Nigeria universities in the management of inter-group conflicts. Survey research design was used for the study while questionnaire was employed as data gathering instrument. Two research questions guided the study. The population of the study comprised all the individuals in Nigerian universities from which six universities and 520 subjects were drawn through stratified and cluster sampling techniques.

Mean and standard deviation were used for data analysis. The analysis of the data showed that university authorities in Nigeria use communication, process, structural and formal dispute strategies in the management of inter group conflicts. Formal dispute strategy is utilized most, followed by the process strategy and next is the communication strategy. The structural strategy is perceived to be utilized by university authorities by the least number of respondents. The study therefore recommended among others, that the National Universities Commission should train university management in the acquisition and appropriate utilization of inter-group conflict management strategies. The intended training could be in the form of workshops, seminars and conferences on the subject matter at regular intervals.

The university is the highest level of educational institution where students study for various degrees and where research work is carried out to advance frontiers of knowledge. However, the aims of the university cannot be achieved without group of individuals who interact with one another to ensure the well-being and stability of the system. There are four defined subgroups in the university system. These are the students, academic staff, non-teaching staff and the university management. Though the above subgroups have different functions, yet they aim at achieving the over-all goal of the university.

Conflict is a phenomenon that is an important part of human existence (Faleti, 2007), and a natural part of our daily lives (Ughamadu, 2009). It is natural that when a group of individuals come into contact with other groups, conflict may arise. Conflict in this context is mutual hostility in inter-human relationship. (Ezegbe, 1997). Inter-group conflict is an integral feature of a complex organization such as the university. Therefore, it is not possible to eliminate such conflict completely in the system. However, a major responsibility of an organization is to keep the intensity of inter-group conflicts as low as humanly possible. Effective managers provide structural arrangement and develop other strategies aimed at building a coordinated team work for the smooth functioning of the subgroup in an organization.

A lot of conflicts have been recorded in Nigerian universities and the effects have been very devastating. For instance in 1962 the students of the University of Ibadan protested to prevent the then prime minister of Nigeria, Alhaji Tafawa Belewa from signing the Anglo-Nigerian defence pact, since then, Nigeria has continually witnessed violent students demonstrations as well as endless strikes by academic and non-academic groups. Such conflicts have resulted in the loss of human lives and properties, rustication and expulsion of students, wastes in academic calendar and closure of the universities. The society stands to loose in such conflicts.

The university administration that has been the target of most demonstrations and protests has adopted some measures or strategies to cope with them. Some of the measures include closing down the universities for months or year, inviting the university security agent or police to quell riots, disbandment of students union, rustication or expulsion of some students. Other strategies include requiring students to pay for the vandalized properties, to tender a letter of apology and promise of good behaviour, as well as compel parental guardians to vouch for the conduct of their wards. Aliu (1992) maintained that the above strategies have been repetitive over time and rather then alleviate the problems of conflict, have aggravated them.

The study was conducted to:

(3)    Find out whether gender is a significant factor in the perceptions of the respondents.