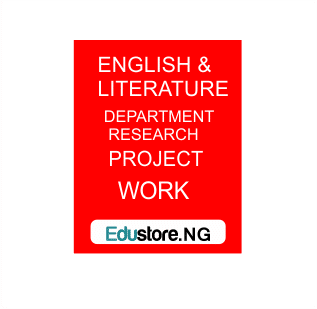 View abstract and introduction below.

Language is a multipurpose and an indispensable instrument for communication in every human Endeavour. However, some languages, apart from performing more functions than the others, are also seen as more prestigious than the others. This study focused on the attitudes of people to Pidgin/Creole worldwide. The purpose was to find out to what extent people’s attitudes towards P/C have affected their growth. To explore the possibilities, the researcher used structured questionnaire. Theoretical and empirical studies on the subject were also presented. All these were analysed using Daniel Karlz’s Functionalist Theory of Attitude. The findings revealed that all over the world, majority of the people still have negative attitudes towards P/C.

Language is one of the major vehicles of cultural experience. Language is also understood from the people who use it because it is assumed that a people develop their kind of language, and the use of such language is unique to the society in which it is spoken or used. The concern of this study is Pidgin/Creole. Pidgins and Creoles, are the many languages of the world but often assigned to somewhat, marginal position. Although they have existed since time immemorial, but in comparison with “fully fledged” languages, little is known about them. (Wardhaugh 54).

The question is, why have P/C not gained such recognition inspite of the fact that the speakers/users cut across the globe? A need has definitely arisen for the study of the attitudes exhibited towards P/C by the society at large.

(1)        What are the attitudes of the uneducated Nigerians towards Nigeria Pidgin/Creole languages?

(2)       To what extent have the attitudes of the educated Nigerians affected the growth of Pidgin and Creole languages in Nigeria?

(3)       To what extent have the attitudes of Nigerian government affected the growth of Pidgin/Creole languages in Nigeria?

Note that the words “Pidgin and Creole” are technical terms used by linguists and not necessarily the speakers. That is why speakers of Jamaican Creole call their language “Patwa” (from Patois) and speakers of Hawaii Creole English call theirs ‘pidgin’ and in Nigeria ‘pidgin’. Pidgins are looked at by Escure as start–up languages, restricted to specific social domains or seasonal events such as trading. They are essentially pragmatic means of communication and remain limited in their structure and vocabulary, in as much as interactive needs are met.

They are languages that developed to enable contacts between colonial masters/supervisors and workers/slaves (http://en.wikipediae/org/wik/pidgin). They are languages that represent speech-forms which do not have native speakers, and are therefore primarily used as means of communication among people who do not share a common language whose degree of development and sophistication attained depends on the type and intensity of communicative interaction among its users. (Muysken and Smith http://en.wik/pidgin). For Bakker, they are languages lexically derived from other languages but structurally simplified, especially in their morphology. They come into being where people need to communicate but do not have a language in common. Pidgins have no (or few) first language speakers, they are the subject of language learning, they the structural norms, they are used by two or more groups and they are usually unintelligible for speakers of the language from which the lexicon derives (http://en.wikipedia/org/wik/pidgin).

Wardaugh (57) also sees a pidgin as a language with no native speakers, no one’s first language but a contact language. By extension, pidgin is the product of a multilingual situation in which those who wish to communicate must find or improve a simple code to enable them to do so. This is why a pidgin is sometimes regarded as a ‘reduced’ variety of a ‘normal’ language with simplification of the grammar and vocabulary of that language considerable phonological variation, and an admixture of local vocabulary to meet the special needs of the contact groups.

Creole languages are mother tongues that arise out of pidgins which by definition are not mother tongues. It is important to note here that pidgin languages are the crucible out of which Creole languages arise. When pidgin language are pushed on to the next generation as a mother tongue and become the language of a community, they turn into creoles (Frank Sil Int.). If a pidgin operates as a lingua franca, as in trade situations, it may persist in its simplified form for a long time. In plantation situation, though the children of the original pidgin speakers may learn the pidgin as a first language, it may become the native language of the new community, when this happens, the pidgin becas a Creole (Grady et al, 503). When children start learning a pidgin as their first language and it becomes the mother tongue of a community, it is called a Creole. Examples are Gullah, Jamaican Creole and Hawaii Creole English (Whorter @ Educational cyber play braind).

In view of the above, it is not a hidden fact as stated previously and widely acknowledged that Pidgin and Creole are on a par with other languages, that in fact, they meet all the systematic structural, lexical and communicative requirements for an operational language. Yet they hold a unique position apart from non-creoles, mostly because they are young, fast, growing and based on several linguistic systems. They are also distinctive because they originated and developed not through child native language acquisition, but through adult constructive processes under emergent stressful condition. They offer testimony to resilience of the human spirit in the face of adversity and the creativity and organization of the human brain. It is there unique properties that distinguish Pidgin/Creole from other languages.

According to the definition suggested by Fasold, attitudes are all kinds of behaviour concerning language (148). It includes attitudes toward the language itself (Annika qtd in http://globalbooknews.wordpress.com)  and attitude towards speakers of a particular language. (Hohenlohe qtd in Agbedo 47). Attitudes are crucial in language growth or decay, restoration or destruction. The status and importance of a language in society and within an individual derives largely from adopted or learnt attitude. (Agbedo 47).

We adopted the functionalist theory of attitude proposed by Daniel Karlz as our theoretical framework.

The functionalist approach focuses on the responses speakers of a language make about the social function of a language (Fasold qtd in Akande and Salami 75). According to Karlz, attitudes are determined by the functions they serve for us and people hold given attitudes because these attitudes help them achieve their basic goals (135).

What are the attitudes of the uneducated Nigerian towards Nigeria Pidgin/Creole languages?

The Attitudes to P/C by People

A sizeable percentage of the speakers of NP in Nigeria are uneducated. This assertion was made by Elugbe and Omamor (140) who observe that NP offers the uneducated Nigerians a chance to communicate with their educated fellow Nigerians who may or may not themselves be speakers of NP. To such uneducated users/speakers especially in the areas that are not traditionally associated with NP, they have a feeling of pride, positive and healthy attitudes towards NP. They feel they have advantage over those who are uneducated and cannot speak pidgin. Examples of this are to be found in Garki (Ugwuoba), some butchers in abattoir, motor-parks, Abakiliki farmers and labourers and even some old men and women in the villages. Atimes, such people are appointed secretaries for their groups. On the other hand, there are the uneducated speakers of NP who simply give no thought to its social or other implications. As far as they are concerned, it is just another language they speak. Examples of these are to be found mostly in those areas traditionally associated with NP – Warri, Sapele, Port Harcourt and other parts of the Niger Delta, police, Army, and other service barracks, Sabon Gari (the stranger-settlements). In these communities, NP has a prominent role and is expanding into Creole with a small, but enlarging, community of native speakers who may or may not have another Nigerian language alongside it. NP speakers of this category have the healthiest attitude to NPE (Elugbe and Omamor 141).