The Role Of Mass Media In A Democratic Governance 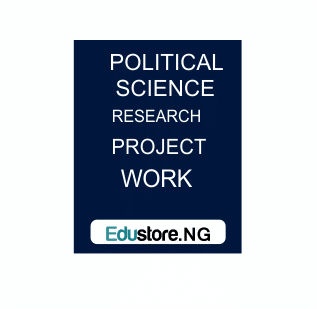 Download full Chapter 1-5 Project topic and material For Final Year student in Mass Communication titled, The Role Of Mass Media In A Democratic Governance. View table of contents, abstract and chapter one below

1.1 Background to the study

1.2 Statement Of The Problems

1.4 Objectives of the Study

1.5 Significance of the study

1.8 Limitations of the Study

2.2.6 Mass Media as a Key Players in the Democratic Process.

2.2.7 The Roles of Mass Media In Presidential Elections In Nigeria

3.1Design Of The Study

3.2Area Of The Study

3.3 Population Of The Study

3.6 Validation Of The Instrument

3.7 Distribution And Retrieval Of Instrument

4.0 Brief Introduction Of The Chapter

4.1Presentation And Interpretation Of Data According To Research

The mass media generally regarded as a channel of communication that are capable of reaching heterogeneous audience simultaneously with uniform message. They regularly cover all sorts of issues such as health, music, fine art, crime, sport, entertainment, political events among others (Meyer, 2002, Soela 2004). The mass media transmits ideas and new information to target audience in the society. Tosanisunmi (2004) has observed that the mass media educate, inform and entertain beyond these functions as they also persuade and catalyze for social mobilization. In other words, the mass media can be regarded as powerful service of information because they have the capability to penetrate every segment of society. They have the ability to disseminate information about issue, ideas and product.

Furthermore, the mass media has that capability to create awareness and knowledge about issues of national interest. The traditional mass media usually consist of radio, television, newspaper and magazine while the news media involves the internet technologies. Contextually, these media have the responsibility to mobilize for national development. In other words, social mobilization for development largely depends on the media for success. Crusade for change and dissemination of useful information against corruption, bad governance and terrorism depend on the mass media. Ogwezzy (2010) states that it is a common knowledge that the media is the engine of mass communication and the avenue through which the public could be reached.

In the other hand, election is an important element of democracy; elections enable the individual to express a sense of belonging to a political system. Elections provide forum for the discussion of public opinion on important issue. Elections allow an exchange of influence between leaders and the electorate (Nwaozuzu 1999). This statement captures the relevant functions of the broadcast media in elections which serves as a mobilizing of all the different people in society and at the same time to co-ordinate the activities as they are made to express their views about candidates who are contesting for political position. The broadcast media through their programmes create avenue through which the people express their views about candidates. There may be phone calls in programmes like radio link, state of the Nation, or debate programmer responsible or otherwise and has made people pass on topical political issues. Also the broadcast media (Radio and Television) provide platforms through which individuals or member of society contribute on issues of public interest. They may be based on stewardship of political offices holders wishing to recontest for elections or it may have to do with electoral law that are perceived to be capable of fermenting violence. Ebo (1997) maintain that: the broadcast media play decisive roles in the lives of the citizens no matter where they are located and whatever their stage of development. The broadcast media are the most potent and sensitive sector of the communication industry considering the reach and influence they have on their viewers and listeners.

Therefore, it is against the above background that this study seeks to examine the role of mass media in a democratic governance, with reference to Nigeria.

The role of media in every society is often to educate, inform and enlighten. It is assumed that, where those roles are adequately carried out, elections are bound to be free and fair. However, in Nigeria, several elections have been marred, the question is how the mass media had mobilized the Nigerian populace. How come electoral processes have not been successful? Is the broadcast media system not commensurate to other media systems elsewhere? These and many others are questions that this study hopes to identify.

The following research questions were considered:

iii. How does the media play the role of agenda-setting during election?

1.4 Objectives of the Study

The general objective of this study is to examine the role of mass media in democratic governance.

The specific objectives of this study are:

1.5 Significance of the study

On the completion of this project the end result will benefit academics, students of political sciences and other researchers that intend to carry out further research on the study of this nature. Also, the practical significance is that the policies /recommendation that will emanate from this study will serve as a guide to policy makers in dealing with issues of this nature.

The scope of this research work will only cover the people within Anambra metropolis. This focus will be on the people living around Abagana, Awka and Onitsha axis of the city.

Ho :Mass media do not plays significant role towards democratic sustenance in Nigeria

1.8 Limitations of the Study

The research work may be challenged by time ,funds and unavailability of materials.

A Political campaign : this is an organized effort which seeks to influence the decision making process within a specific group source Wikipedia (https://en.wikipedia.org/wiki/Political_campaign)

Mass media: This is a medium of communication (as newspapers, radio, or television) that is designed to reach the mass of the people (http://www.merriam-webster.com/dictionary/mass%20medium )

Democracy :  a government in which the supreme power is vested in the people and exercised by them directly or indirectly through a system of representation usually involving periodically held free elections (Oxford English Dictionary)