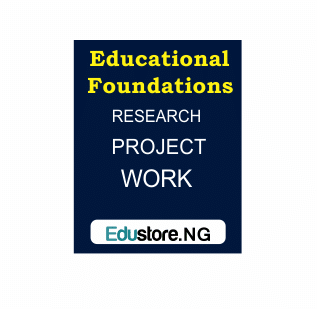 This study was carried out to compare the managerial effectiveness of principals of private and public secondary schools in Awka South Local Government Area of Anambra State. The study was guided by four research questions and one null hypothesis. The sample was made of 499 respondents; consisting of 37 principals and 462 teachers from 19 private and 18 public secondary schools in the area of study. The 499 respondents represented 92.92% of the entire population of 537 of study. The instruments for data collection were two structured questionnaires titled “Managerial Effectiveness Questionnaire for Principals” (MEQ) and “Principals’ Managerial Effectiveness Questionnaire” (PMEQ).

The school is a formal organization and like every formal organization, it has its clear statement of aims and objectives, an organogram that shows the hierarchy of authority and responsibility, a division of labour and line of coordination and communication. Effectively welding these machinery for the achievement of the goals for which the school is set up, require effective management under the leadership of the principal. This is the reason behind the maxim that states that “an effective principal is a necessary precondition for an effective school” (Yu, 2009).

The goal of management is the optimization of the output and achievement of the organizational goals through a maximum utilization of resources. More specifically, Obi (2004), describes the goal of management in education in terms of planning, organizing, staffing, coordinating and directing the affairs of educational institution towards achieving educational objectives. In this study, an attempt is made to ascertain how principals as the heads of secondary schools in public and private schools in Awka South Local Government Area, arrange and utilize available resources, human and material, for the achievement of educational goals. The paper will also examine the difference in the effectiveness in the management of the public and private secondary schools in Awka South Local Government Area of Anambra State. Public schools are schools owned and managed by private individuals, voluntary agencies and churches.

In this study, managerial effectiveness is considered in terms of the extent to which school principals in public and private schools coordinate their human, infrastructural, financial and learning resources for the achievement of the best organizational result seen as the accomplishment of the goals of the organization. In spite of the affordability of the public schools, more parents send their children to private secondary schools. According to Babalola (2004), the mushrooming of private schools in Nigeria today is the consequence of a reaction of the people to the ways governments have organized and managed public-owned schools in Nigeria, especially following the take-over of schools by the government in the 1970s. Ezekwesili (2006) stated that qualifications than their counterparts in the private schools, yet, teachers in public schools are less productive, less committed and less effective than their counterparts in private schools. Governments’ budget for education keeps increasing without a corresponding improvement in the result of students (Olisa, 2006). The result is a growing resentment for public schools (Abatam, 2005).