Bhadeshia H. (2019). Artificial neural networks are the modeling of the human brain with the simplest definition and building blocks are neurons. There are about 100 billion neurons in the human brain. Each neuron has a connection point between 1,000 and 100,000. In the human brain, information is stored in such a way as to be distributed, and we can extract more than one piece of this information when necessary from our memory in parallel. We are not mistaken when we say that a human brain is made up of thousands of very, very powerful parallel processors. In multi-layer artificial neural networks, there are also neurons placed in a similar manner to the human brain. Each neuron is connected to other neurons with certain coefficients. During training, information is distributed to these connection points so that the network is learned.most advanced supercomputers.

The simplest definition of a neural network, more properly referred to as an ‘artificial’ neural network (ANN), is provided by the inventor of one of the first neurocomputers, Dr. Robert Hecht-Nielsen. He defines a neural network as: a computing system made up of a number of simple, highly interconnected processing elements, which process information by their dynamic state response to external inputs.  ANNs are processing devices (algorithms or actual hardware) that are loosely modeled after the neuronal structure of the mamalian cerebral cortex but on much smaller scales. A large ANN might have hundreds or thousands of processor units, whereas a mamalian brain has billions of neurons with a corresponding increase in magnitude of their overall interaction and emergent behavior. Although ANN researchers are generally not concerned with whether their networks accurately resemble biological systems, some have. For example, researchers have accurately simulated the function of the retina and modeled the eye rather well (Egmont-Petersen, 2020). 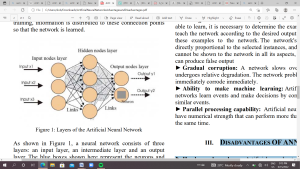 An Artificial Neural Network (ANN) is an information processing paradigm that is inspired by the way biological nervous systems, such as the brain, process information. The key element of this paradigm is the novel structure of the information processing system. It is composed of a large number of highly interconnected processing elements (neurones) working in unison to solve specific problems. ANNs, like people, learn by example. An ANN is configured for a specific application, such as pattern recognition or data classification, through a learning process. Learning in biological systems involves adjustments to the synaptic connections that exist between the neurones. This is true of ANNs as well (Bishop and Christopher, 2015).

In the majority of neural networks, units are interconnected from one layer to another. Each of these connections has weights that determine the influence of one unit on another unit. As the data transfers from one unit to another, the neural network learns more and more about the data which eventually results in an output from the output layer.