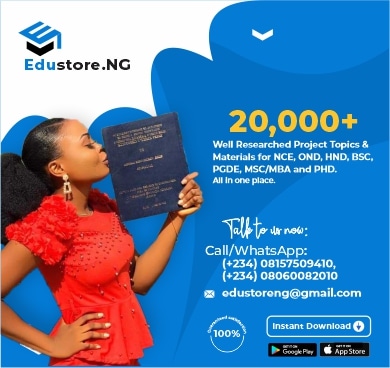 A final year project is an individual work consisting of 10,000 and 20,000 words in a PDF or word document. It is a scientific investigation that usually uses scientific methods to achieve defined objectives and answer the research questions. Completion of a research project contributes heavily to the attainment of a degree programme.

How to Write a Final Year Project

A complete final year project research will contain accurate details of all the five chapters accordingly. While some individuals begin with chapter two so as to get their objectives and statement of problems, others begin from chapter one down to five.

For secondary data, chapter three contains details on the types and sources of data, method of estimation, model specification, and evaluation criteria

When primary data is involved, chapter three contains an introduction that gives brief details of chapter three usually in one sentence. The research design is the framework of research methods chosen by the researcher such as survey (descriptive, case-study, etc.). The population of the study is generally a large collection of individuals or objects that is the main focus of the research. The sampling size is a portion of the entire study population through which statistical inferences for the whole population are made, sampling technique, an instrument for data collection; it is important to decide the tools for data collection because research is carried out in different ways and for different purposes. Method of data collection; which could be a questionnaire, interview method etc. The validity/reliability of the instrument is an important aspect of selecting a survey instrument. Reliability refers to the extent the instrument yields the same results over multiple trials while validity refers to the extent the instrument measures what it was designed for. A pilot test should be carried out. Method of data analysis explains how the data would be analyzed such as in frequency and tables and technique for hypothesis testing.

Summary, conclusions, and recommendations: chapter five comprises of introduction which states in one sentence what chapter five entails, the summary gives brief details of the entire project from chapter one to four. Conclusion states the major finding after carrying out the research, i.e. what the research uncovered. Recommendations are suggestion the research has and it is usually based on findings, limitations to the study are shortcomings or influences which the researcher cannot control and thus place restrictions on methodology and conclusions. Therefore the limitations faced by the study are stated in chapter five after the research is concluded. Suggestions for further studies; other related studies that can be carried out should be stated.

It lists all the sources that have been cited in the research work. It is important that all cited authors are properly referenced. There are different referencing styles, use the one applicable to your school.

they are supplementary material or information that is too cumbersome to be included in the body of the project. It is helpful in providing a more comprehensive understanding of the research. It is the last part of the research project.

After completion of the project from chapter one to five alongside the reference and appendices, an abstract is drafted which contain brief information of the final year project topic, objective(s), scope, method of statistical analysis, finding(s), and recommendation(s)]

After all corrections; the title page, declaration, certification, dedication, acknowledgment, table of content, list of tables, the abstract is included then proceed to bind.