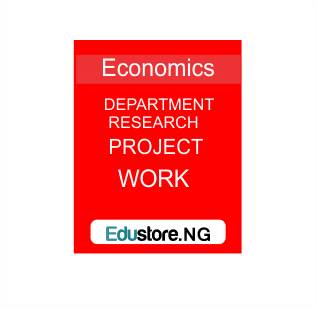 This research work on A Comparative Study of Expenditure Controls method in Government and private Hospitals is aimed at studying and analysing the different methods of expenditure control that is being adopted by these hospitals, their practical application and their level of effectiveness. It is aimed at carrying out a comparative analysis of two hospitals. To achieve the aim of this research, secondary data through textbooks and journals were used to review some of the related literatures. Equally, questionnaires, interview and observation, which sought to find out facts needed for analysing, were used. The questionnaires were analyzed by simple percentages while hypothesis were tested using chi-square statistics. The findings of the analysis indicate among others that the method of expenditure control used by both hospitals are not the same; The daily control method for private hospitals and the vote card method for Government Hospitals. The different methods of expenditure control used by the two hospitals are effective, but with slight loopholes associated with vote card method. I recommend among others that both hospitals should adhere strictly to authorization procedure for drug purchased and materials purchases. Both hospitals should exhibit high degree of cash management and employ competent personnel for proper and efficient expenditure control.

1.6 SIGNIFICANE OF THE STUDY
Control has to be exercised over all aspect of a business organisation as a guard against any form of derailment from the organisations objective.
Therefore, the need to install an effective and efficient expenditure control method in any organisation be it profit making or non-profit oriented cannot be over emphasised. This is because lack of this practice (expenditure control) in any organisation (profit oriented or non-oriented) will cause misapplication of cash in cash disbursement exercise. Thus may create a very high problem which may lead the organisations into deficit and in extreme cases, the organisation may wind up.
This defines why this research hopes to create awareness to management team of government and privately owned hospitals in order to put in place an effective control system.
It will also improve the various ways and methods by which expenditure are being controlled in each of the hospitals.
Being a comparative study, it will be useful to policy formulations in health related issues, hospitals management board and potential managers of the hospitals.

1.7 SCOPE OF THE STUDY
The study is on the expenditure control method on government and privately owned hospitals, as a comparative study, it will be limited to the accounting sections of the hospitals, which deals with its income and expenditure. However, other issue which has direct implication on the control aspect will be treated.

1.8 LIMITATIONS OF THE STUDY
Like every other research work, a lot of things posed as limitations to the research. They include:
a) Financial: The present economic constraint in the country makes it difficult for some families to feed well. Parents are faced with the difficulty of training their children, especially those who have children in the university find it difficult to pay their fees much more sponsoring the research project work. The researcher of this project is not an exception. So also, she uses the limited resources within her reach to make this research work a reality.
b) Time: The interval between chosen of project topic, the submission of the project and the preparation for the degree exams is very infinitesimal, but these are mandatory activities and hence, the researcher was deprived of many other activities to ensure their fulfilment.
c) Attitude of workers: owing to the fact that so many workers (employees) are not aware of what research is all about and its importance, they have non-challant attitude towards the researcher making it difficult for her to get the information’s needed

1.9 DEFINITIONS OF TERMS
For the purpose of clarity, the following terms used in this context are hereby elaborated.
Expenditure control: Management tools that guides and ensures that company/organisational spending are in accordance with the policy plans. Misappropriation: To steal something that you have been trusted to take care of and use it for your own personal benefit. Comparative study: to examine the difference between two or more things. Deficit: Being run at losses. Privately owned Hospital: Hospital owned and financed by an individual or group of people. Audit guidelines: These are basic principles and practices which members are expected to adhere to in the conduct of audit work. Government owned hospitals: Hospitals owned and controlled by government either federal or state government. Liquidation: To cause a business to fold up so that its assets can be sold to pay its debts.