Design And Construction Of A 1.5 Kva Inverter

Home Complete Research Project Topics and Materials In Nigeria Design And Construction Of A 1.5 Kva Inverter 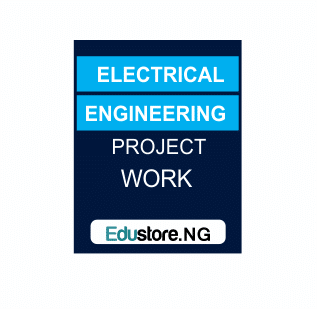 Design And Construction Of A 1.5 Kva Inverter

This project is titled the design and construction of a 1.5KVA DC to AC inverter system.

are used to operate electrical equipment from the power produced by

a car or boat battery or renewable energy sources, like solar panel or

most electrical appliances need in order to run, so an inverter is

necessary in order to convert the power into usable form, it is designed

absence of power supply from the national supply authority, NEPA. In

almost monopolizes the power supply to the people, it is designed in

an output of 220v, 50Hz AC. It makes no noise during operation and no

Hazardous carbon monoxide is generated in the surrounding. The aim

Of this work is to design and construct an inverter that delivers a power of 1.5KVA to a load.

2.2   REVIEW OF HOW TO CHOOSING THE RIGHT INVERTER

2.3   REVIEW OF THE DIFFERENCE BETWEEN SINE WAVE AND MODIFIED SINE WAVE INVERTER.

3.1   BASIC DESIGNS OF AN INVERTER

3.7   HOW TO CHOOSE A RIGHT INVERTER AND BATTERY

3.8   HOW TO CHOOSE THE BEST INVERTER BATTERY

A power inverter converts DC power (also known as direct current), to standard AC
power (alternating current). Inverters are used to operate electrical equipment from the power produced by a car or boat battery or renewable energy sources, like solar panels or wind turbines. DC power is what batteries store, while AC power is what most electrical appliances need to run so an inverter is necessary to convert the power into a usable form. For example, when a cell phone is plugged into a car cigarette lighter to recharge, it supplies DC power; this must be converted to the required AC power by a power inverter to charge the phone.
In modified sine wave, The waveform in commercially available modified-sine-wave inverters is a square wave with a pause before the polarity transition, which only needs to cycle through a three-position switch that outputs forward, off, and reverse output at the pre-determined frequency. The peak voltage to RMS voltage does not maintain the same relationship as for a sine wave. The DC bus voltage may be actively regulated or the “on” and “off” times can be modified to maintain the same RMS value output up to the DC bus voltage to compensate for DC bus voltage variation.

The ratio of on to off time can be adjusted to vary the RMS voltage while maintaining a constant frequency with a technique called PWM. Harmonic spectrum in the output depends on the width of the pulses and the modulation frequency. When operating induction motors, voltage harmonics is not of great concern, however harmonic distortion in the current waveform introduces additional heating, and can produce pulsating torques.
Most AC motors will run on MSW inverters with an efficiency reduction of about 20% due to the harmonic content.

The objective of this project is to design and construct a modified sine wave inverter which can be powered from the source of 12V battery to produce an output of 230vac. This inverter is rated 1.5kva which is capable of operating a wide variety of loads; electronic and household items including but not limited to TV, VCR, and satellite receiver, computers, and printers.

The purpose of this work is to design an electronic device or circuitry that changes direct current (DC) to alternating current (AC). The input voltage (12vdc), output voltage (230vac) and frequency (50 Hz), and overall power handling depend on the design of the specific device or circuitry. The inverter does not produce any power; the power is provided by the DC source. A typical power inverter device or circuit requires a relatively stable DC power source capable of supplying enough current for the intended power demands of the system. The input voltage depends on the design and purpose of the inverter.

In the recent years,  power  inverter has become a major power source due to its environmental and economic benefits and proven reliability. Since the solar power system does not have moving parts, virtually it does not require any kind of maintenance once installed. Power inverter is produced by connecting the device on the 12VDC battery as the input to produce 230VAC as the required output. It can also be connected to solar panel. Second, the whole energy conversion process is environmentally friendly. It produces no noise, harmful emissions or polluting gases. The burning of natural resources for energy can create smoke, cause acid rain and pollute water and air. Carbon dioxide, CO2, a leading greenhouse gas, is also produced in the case of burning fuels. Power inverter uses only the power of the battery as its fuel. It creates no harmful by-product and contributes actively to the reduction of global warming.

Power inverters are used to power and control the speed, torque, acceleration, deceleration, and direction of the motor. The use of inverter has become prevalent in wide range of industrial applications; from motion control applications to ventilation systems, waste water processing facilities to machining areas, and many others. Though power inverters offer lower operating costs and higher efficiency, they are not without their problems. The waveform of this work is modified sine wave. The modified sine wave output of such an inverter is the sum of two square waves one of which is phase shifted 90 degrees relative to the other. The result is three level waveform with equal intervals of zero volts; peak positive volts; zero volts; peak negative volts and then zero volts. This sequence is repeated. The resultant wave very roughly resembles the shape of a sine wave.

The applications and uses of a power inverter which are as follows:
DC power source utilization Inverter designed to provide 230 VAC from the 12 VDC source provided in an automobile. The unit shown provides more than 20 amperes of alternating current, or enough to power loads. An inverter converts the DC electricity from sources such as batteries, solar panels, or fuel cells to AC electricity. The electricity can be at any required voltage; in particular it can operate AC equipment designed for mains operation, or rectified to produce DC at any desired voltage.
Uninterruptible power supplies an uninterruptible power supply (UPS) uses batteries and an inverter to supply AC power when main power is not available. When main power is restored, a rectifier supplies DC power to recharge the batteries.
Induction heating modified Sine wave Inverters convert low frequency main AC power to higher frequency for use in induction heating. To do this, AC power is first rectified to provide DC power. The inverter then changes the DC power to high frequency AC power. HVDC power transmission with HVDC power transmission, AC power is rectified and high voltage DC power is transmitted to another location. At the receiving location, an inverter in a static inverter plant converts the power back to AC. The inverter must be synchronized with grid frequency and phase and minimize harmonic generation. Variable-frequency drives a variable frequency drive controls the operating speed of an AC motor by controlling the frequency and voltage of the power supplied to the motor. An inverter provides the controlled power. In most cases, the variable-frequency drive includes a rectifier so that DC power for the inverter can be provided from main AC power. Since an inverter is the key component, variable-frequency drives are sometimes called inverter drives or just inverters. VFDs that operate directly from an AC source without first converting it to DC are called cyclo – converters. They are now commonly used on large ships to drive the propulsion motors.

Air conditioning an inverter air conditioner uses a variable frequency drive to control the speed of the motor and thus the compressor.

Electroshock weapons Electroshock weapons and tasters have a DC/AC inverter to generate several tens of thousands of V AC out of a small 12 V DC battery. First the 12VDC is converted to 400–2000V AC with a compact high frequency transformer, which is then rectified and temporarily stored in a high voltage capacitor until a pre-set threshold voltage is reached. When the threshold (set by way of an air gap or TRIAC) is reached, the capacitor dumps its entire load into a pulse transformer which then steps it up to its final output voltage of 20–60 kV. A variant of the principle is also used in electronic flash and bug zappers, though they rely on a capacitor-based voltage multiplier to achieve their high voltage.

The various stages involved in the development of this project have been properly put into five chapters to enhance comprehensive and concise reading. In this project thesis, the project is organized sequentially as follows: