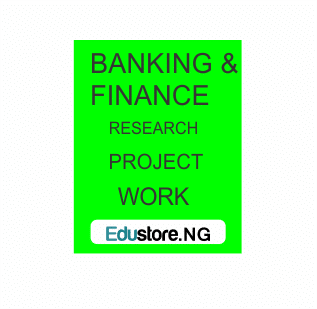 Before the emergence of modern banking system, banking operation was manually done which lead to a slow down in settlement of transactions. This manual system involves posting transactions from one ledger to another which human handles. Figures or counting of money which should be done through computers or electronic machine were computed and counted manually which were not 100% accurate thereby resulting to human errors. Most bank then use only one computer in carrying out transactions which ameliorate the sluggish nature of banking transaction.

Nigeria do not embrace electronic banking early compared to developed countries. Nigeria adopted electronic banking system in the early 2000s.  During the introduction of electronic banking system, the use of raw cash was said to have bred corruption through the “cash and carry syndrome” usually linked with the swift movement of Ghana-must go” bags by some politicians. Such bags as some analyst say, are a major source of corrupt practices as dubious persons seeks to bribe their way to avoid been checked in some sensitive areas or places in a corrupt society.

Since electronic banking started in all Nigeria banks, it has been a woe for civil servants; checks show that some staff in establishments such as the national boundary commission for instance, are yet to receive their salaries for the previous months as efforts to electrically transfer salaries into their account have failed according to Ibrahim, D. (2009).

James, A. (2009) a banker reported to vanguard annual report that “we should not destroy electronic-banking by looking at the negative aspects, we must strive towards perfecting it”. James, A. (2009) also says that the volume of data generated by the Government ministry Agencies is much making it a bit difficult for banks to cope, Mathew S. (2009) a worker says in his report to vanguard annual report on banks and cards that government should have done its home work “very well” before introducing the system, “they plugged us into a system they were not prepared for and the result is untold hardship visited on innocent people”.

At this juncture, is good to know what e-banking is all about.

According to Anyawaokoro, M. (1999). Electronic banking is defined as the application of computer technology to banking especially the payment (deposit transfer) aspects of banking. He also defined electronic banking as a system of banking with an electronic communication network which permits on-line processing of the same day credit and debit transfers of funds between member institutions of a clearing system.

According to Clive, W. (2007) in his Academic dictionary of banking, electronic banking is defined as a form of banking in which funds are transferred through an exchange of electronic signals between financial institutions, rather than an exchange of cash, cheques or other negotiable instruments.

According to Omotayo, G. (2007) defines electronic banking as a system in which funds are moved between different accounts using computerized on line/real time systems without the use of written cheques.

According to Edit, O. (2008) in international Journal of investment and finance, electronic banking is defined as a system by which transactions are settled electronically with the use of electronic gadgets such as ATMs, POS terminals, GSM phones, and V-cards e.t.c. handled by e-holders, bank customers, and stake holders.

Another problem that emerged was that banks do not have information backup to fall back on should there be any computer break down.

In investing in electronic banking, the country will need a large amount of financial resources in computer technology, obviously, the resource is in short supply in Nigeria, couple with high level of poverty. For an efficient functioning of electronic payment system, there must be availability of infrastructural facilities such as electricity and telecommunication network, however, power supply fluctuates and there is still constant failure links in networks.

Since early 2000s banks have been developing and introducing payment cards for their customers as well as deploy ATM’s cards. Usage was however low due to lack of interconnectivity i.e. switching platform to interconnect the ATM’s for card holders.

This research work intends to assess the extent of electronic payment in banking activities as well as identify the various types of electronic banking.

The researcher will also evaluate the major problems associated with the development of electronic banking system in Nigeria as well as evaluate possible solutions to these problems.

The research shall attempt to find answers to these questions in the next chapter.

Electronic banking in our economy today is a welcome development and also its impacts in the society are over-whelming, so this research is significant in so many ways.

This research is on economic implication of electronic banking in Nigeria banks and also the various forms of payment and electronic systems used by banks. The researcher will base this work on the entire deposit money banks in Nigeria but to Diamond Bank in particular.

Time is a major factor to the researcher as research of this kind requires enough time in gathering of data, but it was not given to carryout the research, distribution, collection and analysis of questionnaire.

Finally, finance was infact the most limited factor, in spite of this the researcher have to travel out to the sampled organization to interview some of the managers and supervisors.