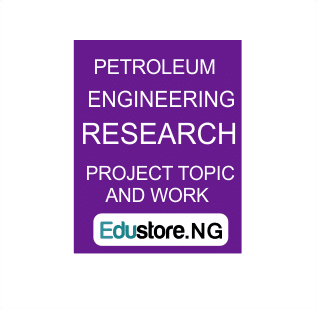 2.4       Successful applications and researches so far

With ever increase in crude oil demand and the presently low cost per barrel, it is highly uneconomical for new exploration, thus there is now need to maximise recovery from the existing reservoir. Surfactant Polymer flooding is an improved oil recovery that can mobilise more oil to the surface from an oil reservoir.

In this paper, we investigated the potential application of SP flooding in a shallow oil reservoir X, located in the Central-Onshore of the Niger Delta. Four different rocks were used namely; ROBU synthetic cores (2 different porosity and permeability classes), a widely accepted model rock (Bentheimer sandstone) and a low permeability-high porosity reservoir rocks (obtained from the Central Onshore of the Niger Delta) were used..Hengfloc 63020 polymer in combination with Shell Enordet O242 surfactant (supplied by Shell research centre) constituted the slug used in this work. The reservoir condition was simulated using the reservoir oil and low salinity brine of 2300ppm.

Initial water-flooding experiments were carried out on the crude oil sample at surface conditions, which was followed by surfactant-polymer flooding at same conditions. Furthermore, analysis of the effluent collected during the experiment was carried out to determine oil recovery.

The results show that firstly, SP flooding can mobilize substantial amount of by-passed oil in the reservoir after the water-flooding. Secondly, a remarkable increase in oil recovery when compared with the literature data shows its applicability in the reservoir of interest. Recovery of above 37% of the OIIP and displacement efficiency of over 50% was recorded.

Accordingly, surfactant-polymer recovery technique is applicable in the Niger Delta, and similar depositional environments. Thus, the practice of abandoning depleted reservoirs in this region can be replaced by using surfactant-polymer flooding to recover residual oil entrapped in the reservoirs.

For most of the oilfields in the world, at least half of the reserved oil is left behind after the primary (natural flow) method is exhausted.Numerous techniques have been established inthe past decades aiming to enhance the energy of the viscous fingered/channelled reservoirs after extensive water injection to improve oil recovery. This process is called improved oil recovery (IOR). Among all the IOR techniques, surfactant- polymer flooding is one of the most promising techniques because of its effectiveness in improving displacement efficiency. 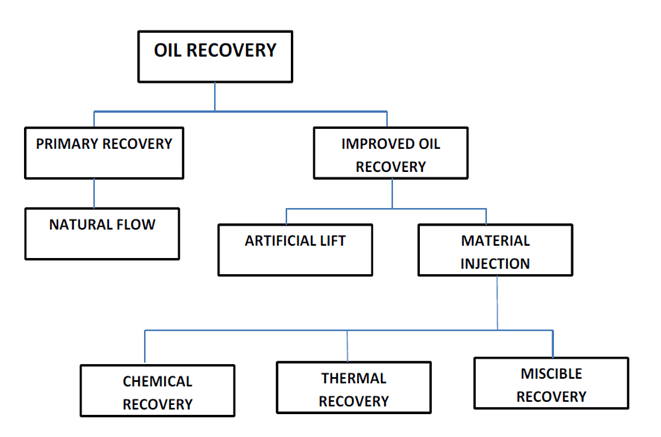 The intent of surfactant polymer flooding technique is to:

Improve sweep efficiency by reducing the mobility ratio between the injected fluid and in-place fluids.

Act on both phenomena simultaneously.

The first intent of surfactant polymer flooding is what a polymer achieves. A polymer is a chemical substance which is made up of monomers. From the word ‘poly’ which means many, and the word ‘mono’ which means single or one, the definition of a polymer is easily understood. Polymers are used in almost every sphere of life: from the household item e.g. cellophane, to the industrial polymers e.g. rubber. In improved oil recovery operations, a polymer is used to improve the volumetric sweep efficiency of water to oil in the reservoir. A polymer does this by increasing the viscosity of the water injected into the reservoir, and by reducing the permeability of the rock to water. It therefore means that any polymer to be used for chemical IOR operation has to be water soluble. There are many types of polymers, but the two most commonly used in chemical IOR operations are the: partially hydrolysed polyacrylamides and the xanthan biopolymers.. Broadly speaking, polymer flooding is capable of raising the sweep efficiency owing to the viscous property; meanwhile, it also can improve the displacement efficiency by mobilizing the capillary force trapped residual oil as a result of the elastic property. Partially hydrolyzed polyacrylamide (HPAM) is the most widely used polymer to date in polymer flooding chemical IOR because of their availability in large quantity with customized properties (molecular weight, hydrolysis degree, etc.) and low manufacturing cost. However, this kind of polymer is susceptible to harsh reservoir conditions such as elevated temperature, salinity, and shear forces, which significantly affects their performance in IOR.

The xanthan gum polymer is a biologically produced polysaccharide. This polymer is believed to be an alternative to HPAM due to the great tolerance to mechanical shear, temperature, and salinity. Moreover, a series of hydrophobically modified copolymers, incorporating a small fraction of hydrophobic monomers into the backbone of poly-acrylamide, have been recently proposed in the market. The hydrophobic interactions in aqueous solution can enlarge the hydrodynamic size of polymer chains and in turn render the polymer solution superior in viscosity and other related features.

Surfactants are compounds that lower the surface tension (or interfacial tension) between two liquids or between a liquid and a solid. Surfactants may act as detergents, wetting agents, emulsifiers, foaming agents, and dispersants Surfactants are usually organic compounds that are amphiphilic, meaning they contain both hydrophobic groups (their tails) and hydrophilic groups (their heads). Therefore, a surfactant contains both a water-insoluble (or oil-soluble) component and a water-soluble component. Surfactants will diffuse in water and adsorb atinterfaces between oil and water, in the case where water is mixed with oil. The water-insoluble hydrophobic group may extend out of the bulk water phase, into the oil phase, while the water-soluble head group remains in the water phase. The “tail” of most surfactants is fairly similar, consisting of a hydrocarbon chain, which can be branched, linear or aromatic.Most commonly, surfactants are classified according to polar head group. A non-ionic surfactant has no charge groups in its head. The head of an ionic surfactant carries a net charge. If the charge is negative, the surfactant is more specifically called anionic; if the charge is positive, it is called cationic. If a surfactant contains a head with two oppositely charged groups, it is termed zwitterionic. 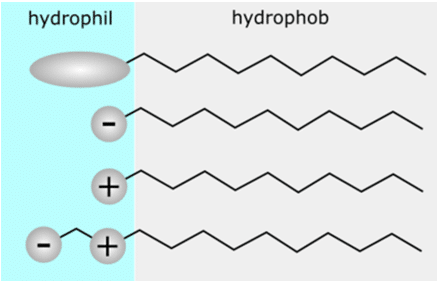 Fig 1:2Surfactant classification according to the composition of their head: non-ionic, anionic, cationic, amphoteric.

Five centuries ago, oil producing companies depended on water-flooding, as the major recovery process other than the energy drive of the reservoir. Since then waterflooding has been studied and applied to numerous fields worldwide with variable degree of success. It was then discovered that a major portion of the OIIP would still be left in the reservoir after performing water-flooding operation.IOR methods are then aimed at recovering this residual oil. Transition from one recovery method to another occurs when the current method becomes uneconomical or the oil production rate drops to very low values. In most cases observed, it has been discovered that progressing from primary to improved recovery method proved to be more efficient. The main aim of IOR is to recover as much oil as possible from the reservoir. Water-flooding accounts for a large percent of oil produced in recent time, but it has a major limitation of low sweep efficiency. Water channelling tends to occur during water-flooding, due to unfavourable mobility ratio. This leads to a large part of the recoverable oil being left in the reservoir. Efficiency of a waterflood operation can be greatly improved by lowering the water-oil mobility ratio in the system. This is achieved by adding a suitable water-soluble polymer to injected water, which increases the viscosity of the injecting fluid. Interfacial tension reduction action of surfactant also helps in improving the efficiency of a water-flood operation.Surfactants are compounds that lower the surface tension (or interfacial tension) between two liquids or between a liquid and a solid.

Recent developments in Surfactant Improved Oil Recovery have greatly reduced the surfactant concentration required for effective oil recovery. Initial development in the 1970’s and 80’s used anywhere between 2-12% surfactant concentration which, when combined with the cost of the surfactants themselves proved cost prohibitive.Recent advances in both research and surfactant product technology have lowered chemical concentrations within the range of 0.1-0.5% dramatically lowering the amount or chemical required. Surfactant manufacturing is now also delivering more advanced and safer chemical IOR products at a lower cost than ever before.

The best news is that these new advances have actually come at an overall improvement for the environment and human health. Some of the newest and most effective IOR surfactants are derived from plant resources such as sunflower oil, soy and corn oil. Envirofluid’s Triple7 EOR, for example, is comprised of amine reacted free fatty acids, fatty alcohols, esters and wax esters derived from soy, corn and seed oil fractions. It is readily biodegradable, non-toxic and non-hazardous. There are many instances where Polymer Displacement and Alkaline Displacement are ineffective.

Because polymer injection increases the viscosity of the flood medium it is generally only effective on highly porous rock. In low permeability rock, polymer displacement quickly reaches a point at which it no longer produces results.Some oil reservoirs also present environments such as high salinity, which is not suitable for common alkalis. These are instances were surfactant polymer flooding is advantageous. 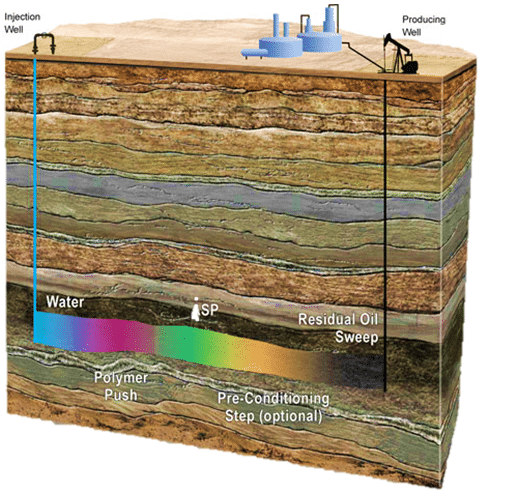 The main objective of this study is to investigate the effects of surfactant polymer flooding on a typical Niger delta reservoir model, using a Niger Delta crude oil. Other objectives are:

The results and knowledge gained from this work will be useful in adequately evaluating the effects of applying surfactant-polymer flooding IOR technique in Niger delta reservoirs. It will help the reservoir engineer to be able to advice management whether or not to embark on a surfactant/polymer flooding program, depending on the reservoir rock properties, and screening criteria.

This work will also help to broaden the prospects of IOR in Nigeria with operators seeking more recovery from seemingly abandoned oil reservoirs after conventional primary and seco8ndary recovery mechanisms.

This study will cover the laboratory analysis of the effectiveness of surfactant polymer flooding when applied to core samples representative of a Niger delta reservoir.

Surfactant-polymer flooding in an oil reservoir can play an important role in increasing production of oil well since applications of polymer flooding in the enhanced oil recovery (EOR) field has shown some successes to recover more than 20% additional oil from OOIP.

Chapter one gives a general introduction to IOR (chemical IOR) including the objectives and scope of study.

Chapter two discusses extensively literature related to polymers, surfactant and surfactant polymer flooding mechanism. The theory behind each of the chemical working is also reviewed.

In Chapter three, the various parameters and procedures used in the experiment are analysed. The methods and materials used are also explained in details. The experimental results obtained are also presented.

In Chapter four, comparison is made between the experimental results and the current industry practice. Detailed discussion on this is also presented here.

Chapter five is a summary of the work. It also presents the conclusions drawn, and meaningful recommendations made.