Mass Media Ethical Orientation And The Quest For Professionalism In Nigeria 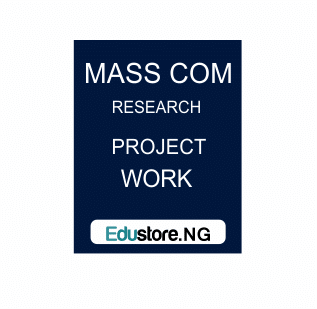 This study is on mass media ethical orientation and the quest for professionalism in Nigeria. The total population for the study is 200 members of NUJ, Lagos state. The researcher used questionnaires as the instrument for the data collection. Descriptive Survey research design was adopted for this study. A total of 133 respondents made up chairmen, secretaries, old members and new members were used for the study. The data collected were presented in tables and analyzed using simple percentages and frequencies

Professional journalists in Nigeria face difficult and delicate ethical challenges involving decisions on both their own ethical conduct and that of the several people with whom they inform. This work intends to assess ethics as key to sound professionalism. Ethics is the principle and value a person (or group of persons) uses to govern the activities they perform and decisions they take. In an organization, thus, a code of ethics is a set of principles that guide the organization in its programmes, policies, and decisions for the business. The ethical philosophy an organization uses to conduct business can affect the reputation. According to Fab-Ukozor (2011, p. 294), the evolutionary phase of the struggle towards professional development in journalism practice shows that starting from the time of Iwe Irohin and West African Pilot, to the period of Daily Times marked an era of non-professional practice. Hence, it was the need to improve and enhance professional practice that inspired the Daily Times of Nigeria to establish the Times Training School in the early 70’s. This was followed by the introduction of the Nigeria Institute of Journalism (NIJ) who with Daily Times of Nigeria Training wing did their best to impact basic reporting skills to Journalists. These efforts which came before the establishment of Mass Communication and Journalism departments in Nigerian Tertiary Institutions churned out crop of Nigerian journalists between late 70’s and early 80’s who could meet with the information needs of the mass media audience in the country. The mass media are faced with the challenge of breaking even and being financially strong enough to be independent and to withstand both internal and external influences that have always been the bane of professionalism in the media. Financial independence is sine qua non for any media institution which can stand the test of time and uphold the ethics of profession. On the other hand, as an institution bestowed with the responsibility of protecting public interest, the mass media strive to play this noble role which the society bestowed on them. That is to be socially responsible (Nkwachi, 2015, p. 219). Therefore, with the entry recently of highly educated professionals, media in Nigeria have insisted on certain ethical standards and accountability on the part of owners and the journalists. This means adhering to those codes ethics that will enhance professionalism. It also means being guided by a code of conduct that ensures professional integrity. There is no doubt that effective and efficient practice of journalism lies in the principles of ethical values which set to regulate its activities towards professionalism. Every organization or profession is basically guided and directed by a set of moral principles which oversee its general conduct. The worrisome state of media practitioners’ attitude in the conduct of their activities necessitated the emergence of various regulatory bodies in order to curb the excesses of media practitioners (Tsegyu & Asemah, 2014, p. 10). These are the Nigerian Press Council (NPC) and the National Broadcasting Corporation (NBC). Later, a more comprehensive code of ethics for journalists was formulated in 1998 by the Nigeria Press Organization (NPO), comprising the Nigerian Union of Journalist (NUJ), Newspaper Proprietors of Nigeria (NPN), Nigeria Guild of Editors (NGE), and the Nigeria Press Council (NPC) (Egbon, as cited in Tsegyu & Asemah, 2014, p. 10). On this background the researcher wants to investigate  mass media ethical orientation and the quest for professionalism in Nigeria

Every profession, including the journalism profession has guiding rules for the practice of the profession. Therefore, journalists, the world over, have to fulfill these rules as to meet the expectations and moral obligations as bestowed on it by society. Mass media practice in Nigeria is generally controlled by the same ethics, as such all the mass media professionals in the country are guided by the same code of ethics. Unfortunately, a cursory observation indicates that certain journalists in Rivers State who are seen as professionals seem to operate and practise outside the bounds of the code of ethics. Thus, some journalists in Nigeria write stories to express their sentiment and involvement; foul and strong languages are published in the media which is a problem to this paper. In some instances, some journalists also incur avoidable problems to their organization on issues relating to ethics. Therefore, to what extent has the code of ethics been seen as the key to sound professionalism in the practice of journalism?

The objectives of the study are;

For the successful completion of the study, the following research hypotheses were formulated by the researcher;

H1:   there is relationship between mass media ethical orientation and professionalism

H02:   there is no extent to which Nigerian journalists adhere to the applicable mass media laws and ethics in their practice

H2:   there is an extent to which Nigerian journalists adhere to the applicable mass media laws and ethics in their practice

This study will give a clear insight on mass media ethical orientation and the quest for professionalism in Nigeria. The study will be beneficial to students, media and the general public. The study will serve as a reference to other researcher that will embark on this topic.

ORIENTATION: The action of orienting someone or something relative to the points of a compass or other specified positions

PROFESSIONALISM: the competence or skill expected of a professional.

1.8 ORGANIZATION OF THE STUDY

This research work is organized in five chapters, for easy understanding, as follows