Lecture Note On Theories Of Administration And Management 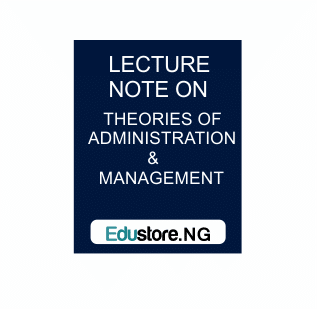 Download Lecture Note On Theories Of Administration And Management on any device to study. Efforts Was Made To Ensure All Concepts Explained In This Note Were Simplified To The Minimum.

Download Lecture Note On Theories Of Administration And Management on any device to study.

Scroll down this page to see steps on how to download this material automatically on any device.

Lecture Note On Theories Of Administration And Management

Efforts Was Made To Ensure All Concepts Explained In This Note Were Simplified To The Minimum.

The word has its roots in ancient Greek, derived from a Greek word, “theoria”, meaning “a look at” in modern usage, and has taken on several different related meanings.

Theory explains how some aspect of human behavior or performance is organized. It thus enables us to make predictions about that behavior. The components of theory are concepts (ideally well defined) and principles.

A theory is a contemplative and rational type of abstract or generalizing thinking, or the results of such thinking. Depending on the context, the results might, for example, include generalized explanations of how nature works. Theories guide the enterprise of finding facts rather than of reaching goals, and are neutral concerning alternatives among values. A theory can be a body of knowledge, which may or may not be associated with particular explanatory models. To theorize is to develop this body of knowledge.

In modern science, the term “theory” refers to scientific theories, a well-confirmed type of explanation of nature, made in a way consistent with scientific method, and fulfilling the criteria required by modern science. Such theories are described in such a way that any scientist in the field is in a position to understand and either provide empirical support (“verify”) or empirically contradict (“falsify”) it. Scientific theories are the most reliable, rigorous, and comprehensive form of scientific knowledge, in contrast to more common uses of the word “theory” that imply that something is unproven or speculative (which is better characterized by the word ‘hypothesis’). Scientific theories are distinguished from hypotheses, which are individual empirically testable conjectures, and from scientific laws, which are descriptive accounts of how nature behaves under certain conditions.

Theory is a general proposition, or logically-connected system of general propositions, which establishes a relationship between two or more variables. A theory is an explanation of a particular social phenomenon. The Oxford English Dictionary, described theory as a supposition or a system of ideas intended to explain something, especially one based on general principles independent of the thing to be explained.

According to Asika (1991) a theory is a statement of invariant relationship among measurable phenomenon with the purpose of explaining and predicting the phenomenon. A phenomenon or concept on its own is our perception of reality to which we have attached some word labels for the purpose of identification. A theory consists of constructs, or concepts, definitions and propositions (hypotheses) and all these are put together to present a systematic view of a phenomenon, specify relationships between the concepts and constructs or variables of the phenomenon and explain and possibly predict the phenomenon.

Shokan (2008) defines theory as a hypothesis that has been tested, confirmed and found to be applicable anywhere and anytime. A theory is developed from generalization which is logical outcome of invariant relationship between or among variables obtained through hypothesis.

Theory is constantly revised as new knowledge is discovered through research. Three stages of theory development in any new science

Function of A Theory

Broadly speaking, theory becomes significant and relevant in an organization. Most organizations depend largely on theory as it performs the following functions:

iii.            A theory is the scientific sense of the world, it is an analytic structure designed to explain a set of empirical observation.

Importance of Theory in Public Administration

Why theory is important?

The administrative theory began in the early 18th century by different theorist which was classified as the early school of classical theory theories such as Federick W.Taylor ,   Max  Weber  and Luther Gulick who shared their contribution toward the   administrative  theory. Beside, the entire three theorists lived during the 18th to the 19th century. Moreover, their input and ideas still has an influence in the succeeding generation of managers and scholars and even today it still continue to significantly influence managerial thinking (Wren & Bedeian, 2009).

The early classical theorist dealt with the scientific management theory, administrative theory and the bureaucratic theory. Their contribution distributed with the division of labour and focused on who must have formal authority and the role of direct supervision but their essence was the same (Jones & Bartlett, 2006). Furthermore, the second generations of scholars were the neoclassical organization theory based on the work of theorists such as Merton and Barnard. Additionally, Barnard contributed toward the system approach in which Barnard believed that the legitimacy of managers directives, and decide whether or not to comply based on their acceptance of authority and their roles as managers. Barnard believed that individuals inside the organizations must take responsibility for the work done and the work that is not done. Barnard, management approach was based on the system approach which dealt with the functions of the executives and how they should exercise authority assigned to them (Gobar & Mahoney, 2010).

Eiilm University defined administrative management theory as an attempt to find  a rational  way  to  design the entire organization. The theory generally calls for aformali3ed administrative structure, in which a clear division of labour and delegation of power and authority to administrators relevant to their areas of responsibilities (Eiilm University, 2010).

You don’t need to go to the bank to pay and contact anyone to send you this material, because you can get it immediately while you are at home, school or office on any device with the use of your ATM card e.g Master, Verve and visa.

In the next page you will be asked to fill your info and click the “Make Payment Button”.

Note, If you already have an account with us please login and continue. But if you don’t, please fill up your info to create an account and click the “Make Payment Button”.

After Clicking MAKE PAYMENT you will be asked to put down your card details and click PAY.

You can also click this Full Guide with images to assist you on how to purchase and download any material.