Welcome! My name is Damaris. I am online and ready to help you via WhatsApp chat. Let me know if you need my assistance.
Chat with us! 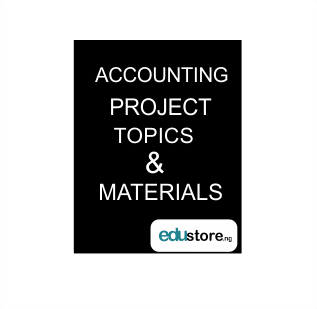 The Complete Material is Available. View Abstract or Chapter One Below.

Do you need help?

Osuagwu (2012) noted in the colonial administration, self-employment was the economic and social way of life for most Nigerians. The businesses of the time were small and operated in the handicraft, manufacturing, constructional activities, including personal, commercial and professional services among others.

Before and after Nigeria’s independence, business climate was almost totally dominated by the Europeans multinational Companies like UAC, CFAO, PZ, Leventisetc. among others. The federal Government shared active participation in promoting small business enterprises in Nigeria by setting up in 1961 the first industrial Development Centre in Owerri. Various government policies and programmes have followed there after that showed the interest of federal government in promoting and supporting small and medium scale business, among which are:

According to the Third Nigerian National Development Plan a manufacturing establishment that employs less than 10 people and whose investment on machinery and equipment do not exceed N600, 000 may be referred to as a small   economics scale businessenterprises. However, in 1995 the Central Bank of Nigeria in its credit guidelines defined small business enterprise as any business organization with an annual turnover of less than N500, 000.

There are divergent of opinions as to what constitutes a small and medium scale business, though there is general agreement (in the literature) that a small or medium – sized enterprise is not a scaled – down version of large – scale company. Rather, it could be conveniently described in terms of shared features that such business possesses. According of Osuagwu, these include:

An additional requirement to be tagged a small business enterprises in Nigeria is that the number of employees is not greater than 50 in any situation and the financial capital outlay is not more than N150, 000.

Working capital and profitability of small and medium scale business

The trust of every business enterprise is to make adequate returns on capital invested. The returns generated (in terms of profit) will depend on the efficiency and effectiveness with which management makes use of its limited resources to achieve its set goals and objectives.

Henri Fayol discovered that major managerial activities of a business organization could be divided into six, which include:

The financial aspect and especially the working capital management of finance and its impact on profitability of small and medium scale enterprise will be considered in this study. Omotoso (2011) described working capital as a tool (distinct from fixed asset stated in monetary terms which is required for day – to – day operations of a company towards the achievement of its objectives). It is used to finance current assets such as stock and work – in – progress, debtors and prepayment, operational cash.

Davies (2011) also noted that of the organization that falls in U.K 75 – 80 percent are profits, table at the time they do so. The problem states the fact that the relationship between cash – flow and profitability but also survival growth and expansion of the business.

The problem of the study is to analyze and rationalize the need for a methodical approach in the management of working capital and to compare this with the rule of thumb method whereby no scientific or systematical method has been applied. We shall look at this problem from the success or failure of most small and medium scale organization vis-à-vis how prudent their working capital management approach has been.