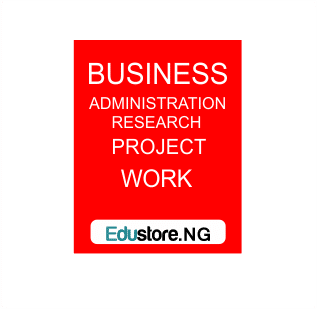 Download The Full Business Administration Project Work On Influence Of Skill Acquisition On Employment Generation.. View abstract and chapter one below.

1.1  Background to the Study

Unemployment has of recent become a global problem with developing nations of the world having the lion shares of the phenomenon. This has resulted in the migration of people from one region of the world to another in search of greener pastures.

In past three decades, Europe has seen people migrating from its eastern part to the western part while Africa has lost so many of her bright scholars and potential citizens through migration to Europe even through unorthodox means such as through the Mediterranean sea and Savannah deserts in search of the so called greener pastures.

Unemployment remains a major challenge of modern economies around the world today, Nigeria is no exception. Resulting from enterprise culture, the unemployment situation in Nigeria is now a major driver of poverty and social vices. The unemployment situation in Nigeria has assumed a multi-dimensional phenomenon cutting across all facets of age group, educational strata and geographies. Unemployment is unevenly distributed across the age groups with youth between the ages of 15 – 24 carrying the greatest burden. More disturbing today, is the ever rising trend of youth unemployment in the country. In the

World of over seven billion population, all the stakeholders, policy makers and government at all levels are finding it difficult to tackle the enormous problems posed by unemployment.

Petterson et al (2006) indicated that unemployment is one of the problems that face every developing economy which includes Nigeria. The effects are more pronounced among the teaming youths. Oviawe (n.d) confirmed that more than half of Nigerian populations are under the age thirty years (30), this indicates that Nigerian economy is a youth driven economy. However, the youth in Nigeria are faced with problems of unemployment, poverty, urbanization, lack of ability and skills needed to move the economy forward (Emeh, Nwanguna, & Abaroh). The challenges of unemployment and lack of necessary productive skills make the task of keeping body and skill together difficult, hence it is a negative impact on the nation’s developmental rate. With youth unemployment, Nigeria and the world at large appears to be heading towards a dangerous abyss that will defy all economic theories and postulations. According to Ossai and Nwalado (n.d), the emergence of light level of unemployment is caused by inconsistencies in the social economic policies of successive government, political instability, and corruption which become the bane of the developmental progress of the nation. Insecurity threatens the corporate existence of the nation via the terrorist (Boko Haram) activities, kidnapping and armed banditry which scare away prospective investors.

Skills acquisition has been described by many as the recipe for eradicating extreme poverty and hunger by creating avenues for employment, thereby creating an avenue for jobs and wealth creation while instilling self-sufficiency and reliance (Isaac, 2011, as cited in Ikegwu et al 2014). One of the major Millennium development goals (MDGs) which Nigeria is set to achieve in 2015 is the eradication of extreme poverty and hunger with the target of tracking the proportion of people who earn less than a dollar a day through skills acquisition. Gumban, a member of the House of representatives opined that “skills acquisition is the key in the fight for the elimination of hunger and poverty, reduction or elimination of joblessness in the society and reduction of crime through effective engagement of youths.

In its frantic effort to seek a way out of the problem of skills shortages in 2008, the federal government constituted a committee known as the “chukwuma committee” to consider appropriate strategies for dealing with the mass unemployment problem in the country under the auspices of the Ministry of Employment Labour and Productivity (Akpan, 2008, as cited in Adavbiele, 2014). Skill development has been man’s means of materials transformation from the earliest time, but for development to take place according to Ikegwu et al (2014) as cited in Diigbo (1989), it takes trained hands to apply the knowledge and techniques effectively.

In the light of the above premises, this research is conducted to establish facts on the influence of skill acquisition on employment generation in Nigeria using selected small businesses in Igando-Ikotun Local Council Development Area, Alimosho Local Government Area of Lagos State.

The consciousness of some certain problems can drastically increase the employment rate in Nigeria, among several problems surrounding the non-existence of employment opportunities, the following problems are identified:

The main objective of the study is to examine the dependency of employment generation on skill acquisition in Nigeria, using selected small business in Igando/Ikotun local council development area, Alimosho Local government Area of Lagos State. The specific objectives are to:

To ensure an in-depth research work with a view to providing best solutions to problems identified, the study will make use of the following questions:

The research hypotheses that guide this study were as follows:

Ho1: There is no significant relationship between skill acquisition and employment generation.

1.6  Significance of the Study

The importance of the study cannot be overemphasized. Therefore, the study is expected to be of high importance to the followings:

Considering the broadness of the concept “skill acquisition” and the topic at large, efforts was made to create the areas of coverage in order to focus fully on those essential areas. The research work constructively shun the broader concept of entrepreneurship skill acquisition but focus more on vocational skill acquisition and technical skills which led to the careful selection of the small business in Igando/Ikotun local council development area, Alimosho Local government Area of Lagos State as the case study in order to achieve the aforementioned objectives.

1.8  Limitation of the Study

The study is being constrained by numbers of factors, which include; financial constraint, ill-health, poor power supply, and time constraint.

Acquisition: This simply means the act of gaining something or being in possession of something received.

Education: Is the process or act of imparting knowledge, skill and judgment. It is the formal or informal ways of possessing the ability to do something.

Employment: This refers to the state of being engage in any socio-economical activity either by working for oneself (self employment) or by working for another (paid-employment) which is capable to serve as a means of livelihood.

Employment generation: This refers to the ability to create jobs or employment.

Government: This is the voted or elected body with the power to make and or enforce laws to control a country, people or organization.

Population: The total number of people living within a nation or country.

Training: This refers to the activity of imparting or acquiring skills.

Unemployment: This is the state of being without job which has being actively searched for within five (5) weeks.

Youth: In this context, refer to any individual above the stage of childhood, who is within the age bracket of 18 – 45.