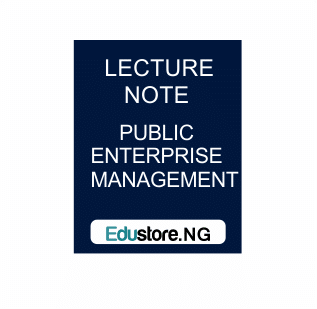 Download The Lecture Note On Public Enterprise Management on any device to study. Efforts Was Made To Ensure All Concepts Explained In This Note Were Simplified To The Minimum. View chapter one below

Scroll down this page to see steps on how to download this material automatically on any device.

Efforts Was Made To Ensure All Concepts Explained In This Note Were Simplified To The Minimum. View chapter one below

The origin of public enterprise could be traced to early twentieth century when government intervened in economic management through departmental organizations, which did not involve creating autonomous public bodies. In the alternative, it granted license to a private enterprise for the management of natural or national monopolies and where public bodies were involved in managing economic ventures, such bodies did not enjoy financial autonomy.

Public enterprise made a very strong appearance after World War I for a variety of reasons, including managing the consequences of the war, especially the economic crisis of the 1930s. However, public enterprises sector developed rapidly because of the spread of Keynesian Interventionist.

Economic nationalism and the success of the Soviet Revolution paved the way for nationalization and strong state intervention in national economic management. When the former European colonies in Africa became independent in the late 1950s and the 1960s, there were only a few public enterprises in different countries.

Other reasons include the urge to generate revenue to limit foreign economic domination, and to provide a substitute for private initiative where it was not forthcoming. Public enterprises in Nigeria date back to the colonial era when colonial government established some public enterprises to provide essential services like electricity, railway, and water.

The post independent era marked a watershed in the growth and spread of public corporations. At Independence in 1960, Nigeria had 50 public enterprises, 200 in the 1970s and 1,500 in 1987 when government embarked upon economic reform programmes.

The factors that account for the phenomenal increase include: the evolution of the federal administrative structures (from four units in 1950s to twelve in 1967, nineteen in 1976, twenty one in 1987, thirty in 1991 and thirty six in 1996), the oil boom, and successive governments commitment to making public enterprises an instrument of state economic intervention in the 1970s (Adamolekun, 2002).

According to Malaya (n.d), “Public enterprises are autonomous or semi-autonomous corporations and companies established, owned and controlled by the state and engaged in industrial and commercial undertakings”.

Public enterprise, a business organization wholly or partly owned by the state and controlled through a public authority. Some public enterprises are placed under public ownership because, for social reasons, it is thought the service or product should be provided by a state monopoly. Utilities (gas, electricity, etc.), broadcasting, telecommunications, and certain forms of transport are examples of this kind of public enterprise.

Fubara (1990) described public enterprises as an instrument of national policy for economic development. For Adamolekun (1983), “Public enterprise ’emerged as a result of government acting on the capacity, of an entrepreneur” Governments acquire business interest through parastatalization strategy, nationalization of existing-.private entities and the establishment of fresh productive entities or joint venture schemes so as to learn certain managerial and productive skills from foreign partners.

Freidmann (1954) views public enterprise as “an institution operating a service of an economic or social character on behalf of the government but has an independent legal entity, largely autonomous in its management, though responsible to the public through government and parliament and subject to some direction by the government, equipped on the other hand with independent and separate fund of its own and the legal and commercial attributes of a commercial enterprise”.

You don’t need to go to the bank to pay and contact anyone to send you this material, because you can get it immediately while you are at home, school or office on any device with the use of your ATM card e.g Master, Verve and visa.

In the next page you will be asked to fill your info and click the “Make Payment Button”.

Note, If you already have an account with us please login and continue. But if you don’t, please fill up your info to create an account and click the “Make Payment Button”.

After Clicking MAKE PAYMENT you will be asked to put down your card details and click PAY.

You can also click this Full Guide with images to assist you on how to purchase and download any material.