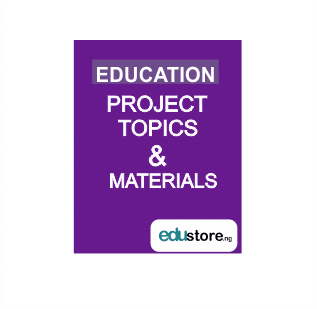 Often in multivariate analysis, fairly large numbers are be used but the objectives of principal component analysis are data reduction and data interpretation.

Principal component analysis can reveal relationships that were not ordinarily result.

Principle component analysis as reduction technique to reduce the variable beings considered in the performance of students in Anambra State and to know many variables to keep and how many to discard. The use of correlation matrix in the data analysis which takes care of the correlation of the principal components not being invariant under separate scaling of the original set of variable. In this work principle component analyses data form the past two WAEC result 2007 and 2008 sheet contain the entire senior secondary school three that took part in (8) different courses. In analyzing the data, statistic package known as state view and SPSS where used.

In conclusion it has been established that four linear combination for the first set of data can be replace by the original eight  variables without loss of information.

Principal component analysis (P C A) is concerned with explaining the variance – covariance structure through a few linear combinations of the original variable with it general objective in data education and interpretation.

Principal component analysis is an advanced method and techniques by which a set of observed x variable can be expressed or transformed as a linear combination of smaller set of principal component which are linear independent.

Principal component analysis examine whether the joint variable in p observable random variable x1,x2…..xp can describe approximately in terms of the joint variation of a fewer number, say K < P of hypothetical  variable. In other words, we want to replace a set of P variable by K linear function, K < P, without much loss of information. To do this we usually seek for linear transportation of this type yi = ∑a і = I, 2 ….p which we describe the original variable in lesser number of uncorrected dimensions. This is accomplished by the analysis of all the correlations among the variables. The success of the method depends on obtained two or three new uncorrelated variables, which account for as much of the variation as possible. If the first two or three of these new variables account for nearly the whole of the variation and the contribution of the other p2 a ps  is small, we may say that the total variation is approximately accounted for the first two or three of the new variables, and we may therefore neglect the remainder suppose, λ1, λ2,….. λm    be characteristic root of A we can find a vector pi (m xi), such that A PI = xipi, the p is called the latent  the vectors. Given the latent root  λ1 ≥ λ2 ≥  …≥λm and the corresponding latent vectors pi,

is called the principal component of x.

1.1    WHAT IS PRINCIPAL COMPONENT ANALYSIS

Principal component is also concerned with explaining the variance – covariance structure through a few linear combination of the original variables. Its general objectives are.

The basic idea in carrying out principal component analysis is that the back of observation will be very close to a linear sub-space and hence one can use a new coordinates along the data explain great variability.

Most time we are dealing with a falsely large number pk of correlated random variable, it would be useful if we could reduce it to a smaller number of random variable in such away that

i         The random number of variable account for the large parts of the total variability.

ii        The remaining number of variable are interpretable in terms of original problem.

In conclusion, a lot of useful information can be deprived and advice given using principal component analysis on normal data, provided the multivariate data have good structure to be extracted from it. In this word, the variables are assumed to have multivariate normal distribution.

Some of the importances are:

1.   An analysis of principal components are more of means to an end rather than an end in themselves because they frequently serve as intermediate step in much large investigations.

2.   Principal component analysis may be a solution of inputs to multiple regressions.

3.   An analysis of principal component often reveals relationship that not previously suspected and thereby allows interpretations that would not ordinarily result.

4.   Principal component analysis provides a statically method for detecting and interpreting linear singular reties in a set of data.

5.   Principal  components analysis are one factoring of the covariance matrices for the factor analysis model

Aims and objective of this work include.

1.           To determine the relative correlation between the various subjects.

2.           To determine the relatives contribution of each course to the performance of students.

4.           To show principal component potentials as a   means to explain the performance of student on some course.