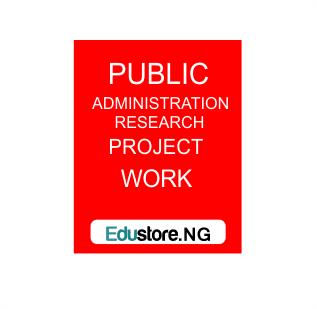 Download full Chapter 1-5 Project topic and material For Final Year student in Public administration titled, Public Policy Implementation In Nigeria And Economic Development (A Study Of The National Policy On Population 1999-2007). View table of contents, abstract and chapter one below.

The study evaluate the effective implementation of the National policy on population for sustainable development particularly the conduct of year 2006. It was designed to measure how the conduct of census  2006 met item “19” of the objective of the population policy.

Research findings indicated that the following factors were largely responsible for poor monitoring of the implementation of various aspects of the policy particularly the census 2006 project by relevant agencies, time constraints, logistics contrains and inadequacy of trained manpower. The study amongst others measures recommended that the various implementation agencies particularly the National Council on Population Management (NCPM) and the National population  commission (NPC) should take their statutory roles of monitoring seriously and provide guidance for overall policy implementation

Recording human numbers using statistical method is not a recent phenomenon. It is the method used for collection, analyzing and interpreting of numerial data relating to a certain area of investigation as well as for drawing valid conclusion in situations of uncertainty and variability.

The statistical knowledge for effective national planning equitable governance and planning for the future. It also serves as a basis for resource distribution such as rereme allocation, constituency representation, employment, the siting of industries and social amenities (hospitals, school, post office, road and police stations); and the allocation of legislative seats for each in federal and state house of assembly.

Due to these population recorded census in Nigeria has become politicalised, the political elites has come to understand the degree to which recording human numbers determined the population of government amenities distributed to them and their economic and political weight within their society.

These had come to manipulation and falsification of population census figures of groups or regions within the country. The political and economic development in Nigeria would have been much easier if reliable population data were available, because the absent of trustworthy or accurate population data directly affects the governments inability to ensure balanced political representation and equal access to important governmental resources.

In this paper, the research commended a biometric system approach to population census and identification is proposed to help stop the manipulation and falsification of population figure in Nigeria. This use of biometric technology for population census and identification will help Nigerian government to identify and have data records of its citizens which will enhance political and economic representation of each group and region in the country.

Public policy may be conceptualized as decision making at the federal government level. It may be perceived as a general rule or principle within an organization which is meant to guide future decisions or plans or actions. The national population policy which was enunciated by the federal military government in 1988, and subsequently reversed in 2004 was designed to guide the behaviour of Nigerians in population matters. It is now nearby two decades since it came into being. It therefore become imperative for one to examine the extent this lefty policy has been fully implement.

Given the important of up data population data-base as a critical tool for good planning and governance Nigeria faces major challenges in developing a timely and high quality population data base. Major sources of population data in Nigeria include censuses, surveys, vital statistics and administrative record for the purpose of this study, the research will focus on census 1991/2006 because census is an instrument for capturing the population and population characteristics of the entire country. Population census is a project design to achieve item “19” amongst the objectives of the policy which state- improve the population, social, economic data based, promote and support population, and development research and help leadership groups recognize the important contribution that planning and data utilization make to the good governance of Nigeria.

After the conduct of 1991 and 2006 censuses it was expected that government can plan affectively to combine the incidence of poverty since data on covering various aspects of the census had been make available. Rather the world bank after conducting its survey on human resources and poverty in 2006, reported that 43 percents of the population was living below the poverty line. This report has in gendered a critical question has accurate in our population data? Is it as all been made use of by government for planning and development purpose? Given the above scenario, this study seeks to evaluate that factor which undermined the effective implementation of 1991/2006 census, with a view to measure how it meets the “19” objective of the population policy.

An accurate and up to data population data base is a critical tool for good planning and good governance stated the population policy. To generate and develop a timely and high quality database Nigeria conducted a census in 1991 and 2006 respectively. It is expected that data generated through the census would meet objective “19” of the population policy provided for an improvement on the population, social and economic database promote and support population and development research, and help leadership groups recognize the important contribution that planning and data utilization make to the good governance of Nigeria. The arm of the policy been to improve the quality of life and achieve sustainable development in Nigeria.

After nearly twenty years of implementing the population policies, through the conduct of 1991 and 2006 population census, the goal of the policy which is to improve the quality of lives and achieve sustainable development have proved elusive. The above situation was captured strongly by the World Bank when it re-ported in 2006 that 43 percentage of the population was living below the poverty line. The findings raise questions concerning the implementation of the 1991/2006 census (es). In both census (es) were the enumeration areas covering the entire country thoroughly delineated was there a through enumeration of the entire country? For planning and development related matters did government make use of the figures published? Given the above questions thus study seeks to evaluate the factors which undermined the effective implementation of the census 1991/2006 projects.

The findings will enable us to assess the level the implementation of the census project met the goals of the population policy.

The general purpose of the study is to assess public policy implementation and effect on economic development.

Other specific purposes of the study include;

development particularly the conduct of year 2006 census has been a success.

The study is significance in the light of the following

To aid the present research effort, the following research questions are found pertinent.

1.6   SCOPE/DELIMITATION OF THE STUDY

This research examines the factors which undermined the effective implementation of the 1991 and 2006 census, with a view to measure how the implementation met the “19” objective of the national population policy. Because the policy covers a wide range of issues, and the limitation of time the study is restricted to espect of the policy sources of population data (which is census) and objective “19” of the policy which states to improve the population, social and economic data-base, promote and support population and development research and help leadership groups recognize the important contribution make to the good governance of Nigeria”.

1.7   LIMITATIONS OF THE STUDY

In a research project of this nature, it is always difficult to complete the work without going through a number of factors which constituted impediments source of the respondent were reluctant to air their views. This resulted in the researcher not being able to gather the entire questionnaires distributed.

We were constrained by time especially to move from one library to the other, typing the questionnaire and distributing them.

Finance is another constraint. A lot of money was needed for transporting, typing etc. Despite these research did her best.

To aid the present research effort, the following terms and acronyms are defied.