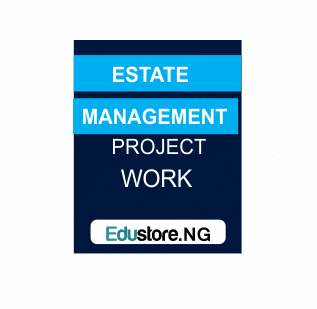 The housing situation of the urban poor is a source of deep concern in Nigeria, as in most less developed countries (LDCs). However, as studies have shown, the problem of housing is a universal one, as virtually all countries are faced with the problem of providing adequate accommodation for their citizens. In the urban centres in Nigeria it has reached an alarming state, as almost 75 percent of the urban dwellers live in slums and in conditions that are degrading to human dignity. The plight of the urban poor has not been adequately addressed in spite of the activities of government in housing delivery, and private sector participation as well.

1.0       INTRODUCTION AND BACKGROUND TO THE STUDY

Housing is paramount to human existence as it ranks a mirage and it needs to be critically addressed. Olotuah among the top three needs of man. Its provision (2009) has observed that the disparity between the price always been of great necessity to man. As a unit of the quantity of housing on the one hand and the number environment housing has profound influence on the number of households and the money available to them to pay for health, efficiency, social behaviour, satisfaction and these prices on the other, constitutes the central problem general welfare of the community. It is a reflection of the housing. The cost at which houses reach the market cultural, social and economic values of a society and one goes a long way to determine affordability. Where the unit of the best historical evidences of the civilization of a cost of houses is abnormally high.

According to Okupe and country is very vital as housing is a stimulant of the Windapo the gap between income and housing cost in national economy. Housing is a set of durable assets.

Housing delivery is a highly contentious and politicized issue that is of great concern to administrators, scholars and the public in Nigeria. In the last few decades, the influx of people into urban areas, the natural population increase and inadequate responses by the government have contributed to the worsening housing situation in the country, to the extent that economic development and the welfare of the citizens are adversely affected. These problems are more critical in the cities, where huge housing supply deficits, dilapidated housing conditions, high cost of housing as well as proliferation of slums and squatter settlements exist.

In many developing countries, housing crisis is escalating unabated despite a number of new policies, programs and strategies being engaged in by public and private sectors in addressing this problem. The majority of those in need of housing in many less-developed nations in Africa, Asia and South America are in the low income cadre and some require special housing programs to be able to live in decent housing. Since market solutions and funds may not be suitable for housing this category of people and in view of the vital role housing plays in the socioeconomic and political development of any nation; governments in these countries have over the years been engaged in public housing provision.

It is in the light of the above that the study examines urban poor’s accessibility to public housing in Nigeria using Ijora-Badia, Lagos State as a case study.

In Nigeria, like in many other developing nations of the world housing problems are multi dimensional. The problems of population explosion, continuous influx of people from the rural to the urban centres and the lack of basic infrastructure required for good standard of living have compounded housing problems over the years.

A number of challenges are militating against the provision of housing for the urban poor in Nigeria. These challenges include high rates of urbanization and population growth, absence of proper monitoring and evaluation of public housing policies and programs, lack of easy access to land and other housing inputs, cost of imported building materials among others. As a result, public housing in Nigeria has been criticized for failing to generate tangible and sustainable housing production, distribution and acquisition mechanisms to meet increasing housing demand, particularly by low-income earners.

The aim of the study is to examine the urban poor’s accessibility to public housing in Nigeria.

In order to achieve the above aim, the following were the objectives;

Data for the research will be collected from both primary and secondary sources. Primary Sources include administration of well-structured questionnaire, interview with respondents as well as personal observation of the research.

This research work covers the urban poor’s level of accessibility to public sector housing. Over the years, there has been some level of neglect on the part of government in housing the urban poor. In most cases, houses found to be built by government housing agencies seem not affordable to the poor citizens and as a result, makes the effort of government towards housing delivery to be unrealistic. The scope of this study is therefore limited to Ijora Badia axis of Lagos State where access to quality housing is found to be wanting.

In a study of this nature, one is bound to encounter series of problems in getting the required data that will meet up with the expected standard of course, the research include the use of both the primary and secondary data and however, there were some problem encountered. These include financial and time constraints. Other notable problems that cannot over employed include high cost of transportation incurred while collection of data.

This study will be useful to many sectors of the economy, as little research has been done on this area. Thus government agencies saddled with the responsibility of housing provision will find this study useful as it will reveal the bottlenecks associated with the unsuccessful outcome of government housing delivery programmes.

Also, the general public will be informed on the reasons why government programmes and policies towards providing affordable housing often fail to see the light of the day.

Lastly, students who are researching on similar topic will find this study useful as source of material for their write-up.

1.8.1    PUBLIC HOUSING: Public housing may be a form of housing tenure in which the property is owned by a government authority, which may be central or local. Social housing is an umbrella term referring to rental housing which may be owned and managed by the state, by non-profit organizations, or by a combination of the two, usually with the aim of providing affordable housing. Social housing can also be seen as a potential remedy to housing inequality. Some social housing organizations construct for purchase, particularly in Spain and to an extent elsewhere.

Although the common goal of public housing is to provide affordable housing, the details, terminology, definitions of poverty and other criteria for allocation vary within different contexts.

1.8.2    ACCESSIBILITY:  Accessibility refers to the design of products, devices, services, or environments for people who experience disabilities.[1] The concept of accessible design and practice of accessible development ensures both “direct access” (i.e. unassisted) and “indirect access” meaning compatibility with a person’s assistive technology (for example, computer screen readers).

Accessibility can be viewed as the “ability to access” and benefit from some system or entity. The concept focuses on enabling access for people with disabilities, or special needs, or enabling access through the use of assistive technology; however, research and development in accessibility brings benefits to everyone.