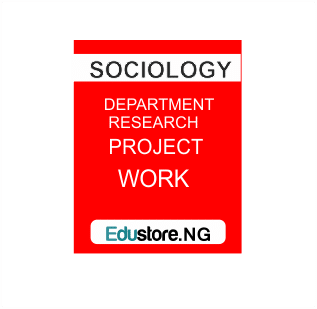 The South-West region in Nigeria is one of the  of the most naturally endowed location. it is also blessed with scenic canopy of untainted mangrove forest, innumerable supply of aquatic life stock and rich and diverse cultural heritage of its teeming populace. Development of world class tourist destinations in the region has however remained a mirage due to the incessant crisis and militarization of the region between various ethnic militia who are agitating for environmental friendly oil exploration techniques ( including share of oil wealth) and Nigeria armed forces. The study used primary and secondary data, the primary data were collected through a questionnaire survey of 85 respondents in Akure North and Akure South of Ondo stat. the data collected were analyzed and presented with the use of simple frequency percentage table on the perception of the respondents on the effect of the crisis on the socio-economic development of the region and its tourism potentials, The project recommended and emphasized the need for concerted efforts that will discourage tension and outbreak of crisis in the region by all stakeholders.

Tourism in recent times has developed significantly to become one of most rapidly growing industries in the world. According W.T.O (2002), ‘global economy is presently driven by three major industries and these are technology, telecommunication and tourism’. This assertion clearly corroborated the view of Poirier (2000) who opined that ’tourism today is second only to oil as the world’s leading export commodity, accounting for global earning of more than $300 billion dollars or nearly 25% of total world gross national product (GNP) in the last decade’ Obviously tourism growth and its resultant effect on economic fortunes of nations globally are not uniform. It is a truism that irrespective of how naturally endowed a location can be, or well developed the physical infrastructure are, without peaceable environment such resources may never yield their full tourism potentials .It has been established that the global tourism industry is quite sensitive. Thus, the driving force for tourism demand and supply can be susceptible to extreme events such as terrorism, political violence and natural disaster (Arana and Leon 2007; Ryan 1993; Page and Connell 2003;Glenn 2001).

Tourism is an example of a straight-forward concept and is defined by Essner (2003) as ‘a service based industry which is made up of several elements including transportation, accommodation, food and beverage, tours and merchandising’ Terrorism, however, is a more challenging concept to define. For decades, scholars have debated the “terrorist vs. freedom fighter” dilemma. Enders and Saddler(2002) may offer the best definition, regarding it as’….. the premeditated use or threat of use of extra normal violence or brutality by sub national groups to obtain a political, religious, or ideological objective through intimidation of a huge audience, usually not directly involved with the policy making that the terrorist seek to influence’ Furthermore, as terrorism against tourists often involves international citizens, international terrorism is defined as “terrorism involving citizens or the territory of more than one country.” (Essner,2003).

There exists a noticeable symbiotic relationship between peaceful atmosphere and tourism development in a destination. Evidences have proven that the absence of terror or violence along with related factors is usually a pre-condition generally accepted for the development of destinations by would-be investors (Wahab 1995; Reichel 2004; So’nmez 1998). Researches have equally shown that political instability and relations influence the images of destinations in tourists-generating regions (Hall and Sullivan, 1996; Goodrich, 2002). The negative images that are projected due to crisis and political instabilities are often difficult to dislodge even after the end of such crisis. Governments and authorities from nearly all tourist generating countries rightly holds the lives of their citizens dear. To this end, threat to lives, personal safety and properties of tourists and their possession overrides any other considerations. A good example is the United State Information Service (run by the USA government) which gives periodic information on its data base to American tourists and citizens on crisis ridden regions and nations. Goodrich (2002) asserts that the US government outlined regular travel advice warning to its citizens to avoid a wide range of countries as a direct off-shot of the 9/11 al-Qaeda (Table1). Empirical findings evinced that often the responses of tourism industry to crisis of any nature is predictable; usually resulting in a sudden reduction in the numbers of in-bound tourists and deepening economic fortunes of the host region or tourist destination. For example Mwathe (2011) reported that the political crisis in Egypt which engulfed the nation in 2011, occurred at the peak of in-bound tourist flow. Already the impact is seriously felt in massive reduction in tourist visits to historical sites in Luxor, Aswan and Cairo coupled with cancellation of hotel reservations and bookings.

1.3 OBJECTIVES OF THE STUDY

The purpose of this research paper was to analyze the phenomenon of terrorist acts, and various strategies used to address the effect on tourism and the hospitality industry in South-West. The problem with terrorism in society is that terrorism strikes fear in everyone that is directly and indirectly involved with occurrences of terrorist acts. The objectives include.

1.  To find out how terrorist acts affect the volume of tourist activity in South West

2.     To examine the severity or frequency of terrorist attacks and the impact on hospitality and tourism industry in South-West.

3.     To suggest what government policies and procedures should be put in place following a terrorist attack are effective in diminishing the impact on the tourism industry in the event of another potential tourist attack in South-West

The questions to be addressed include.

1.     How do terrorist acts affect the volume of tourist activity in South-West?

2.     Does the severity or frequency of terrorist attacks have a higher impact on hospitality and tourism industry in South-West?

3.     What government policies and procedures put in place following a terrorist attack are effective in diminishing the impact on the tourism industry in the event of another potential tourist attack in South-West?

1.5 LIMITATION OF THE STUDY:

The time limited given for the completion of this research work is a major limitation of the fact that the researcher has to combine this work with other tasks as a student. Again, the cost involved in a study like this is much and cannot be easily met by student hence, the size of the work, the distribution of the questionnaire, number of travelling and interviews under went for the actualization of the work.

LACK OF ADEQUATE DATA:  Adequate data have not been gathered about rural industrialization nor have we enough statistics about it.  If the government authorizes free availability of adequate data for students on this regard, it would make effective impact on study of this nature.

LACK OF RESEARCH SKILLS:  Some of these skills are very procedural, for instance, how to use a database while others involve critical thinking.  Where students lack the research skills, the aim of the research work remains ineffective.

Most information for public consumption is sometimes tagged secret, thereby restraining our ability to lay hands on all the necessary information or data needed to the proper fulfillment of the subject matter.  May the Government kindly provide all it takes to avail the availability of needed information for thorough research works.

However, with the above difficulties encountered during the study period the work was able to overcome all these limitations in order to present valid results.